Monitoring programmes once opened our eyes to heavy pollution levels and excessive nutrient inputs in the air, water and soil. Today, long-term monitoring programmes are showing that countermeasures definitely yield results. But there is still much work to be done. 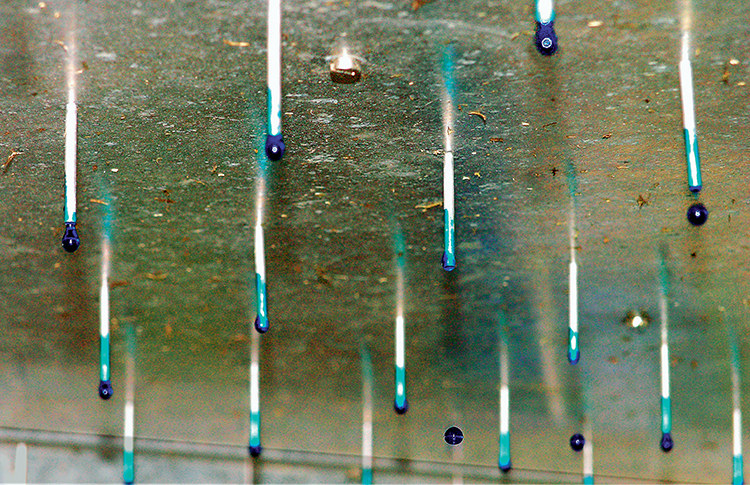 In the 1980s, sulphur dioxide levels caused by burning thermal and motor fuels strained the environment and contributed significantly to the formation of acid rain. Today, sulphur dioxide emissions have shrunk to a tenth of their levels in the 80s and are almost not a problem anymore. Air pollution measurements prove it. The positive development in sulphur dioxide is primarily due to the removal of sulphur from heating oil and diesel, which the Swiss federal government ordered after the problem had been identified.Regulations on exhaust emissions from heating, municipal waste incineration and industrial installations, as well as limit values for exhaust emissions from motor vehicles, have lowered the emissions of other pollutants. In fact, nitrogen oxide pollution has declined significantly since 1990. However, nitrogen inputs from the air are still too high (cf. also “Stickstoff - Segen und Problem” inumweltissue 2/2014). This can be largely attributed to ammonia from agriculture. In species-rich dry and wetlands, for example, unwanted fertiliser eliminates species that are unable to compete, and this reduces biodiversity.The health risks are also enduring because local levels of ozone, particulate matter and carcinogenic pollutants are too high. In sum, Switzerland came closer to the targets of the Ordinance on Air Pollution Control of 1986 but did not fully achieve the “clean air” goal. A series of measurements makes it clearThe 16 monitoring stations of Switzerland’s National Air Pollution Monitoring Network (NABEL), which the federal government has operated since 1979, monitor long-term changes in air quality. They measure the most important air pollutants. The cantons also monitor air quality because they are responsible for implementing the Ordinance on Air Pollution Control within their territory. Long-term monitoring programmes have also had considerable success in protecting bodies of water. For instance, the Swiss National River Monitoring and Survey Programme (NADUF) introduced in 1972 shows how much heavy metal and nutrient pollution has decreased. The phosphate load in Basel’s section of the Rhine River has dwindled to 20 percent of what it was in the late 1970s, thanks to phosphate precipitation in waste water treatment plants and the ban on phosphate in laundry detergents. Separately collected measurement data for lakes also show a positive development: While phosphate levels in the 1970s rose to over 500 microgrammes per litre in extreme cases, they are now below 20 microgrammes in most lakes. The situation is still problematic in areas where intensive livestock farming occurs. The nitrogen balance - both in the air and water - is unclear: Nitrate levels in watercourses have fallen, but not enough yet. Nevertheless, the limited use of mercury has clearly reduced these levels in watercourses, while lead pollution has decreased thanks to lead-free petrol.In the meantime, the focus has switched to other environmental threats such as micropollutants from medicines or biocides. New solutions are required for these threats. To find them, Switzerland’s federal and cantonal governments introduced the National Surface Water Quality Monitoring Programme (NAWA) in 2011. Along with a higher number of monitoring sites and the additional biological data collected, this programme tackles the problem from a broader perspective.

The water hoses above the nozzle plate 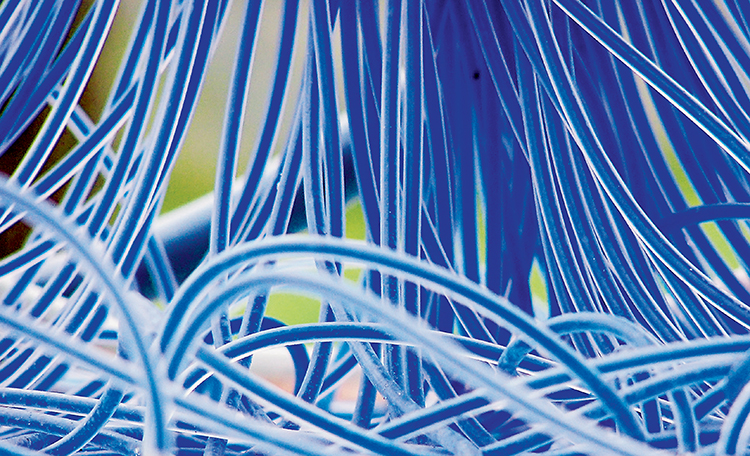 While the pollutants measured in the air or in bodies of water strain the environment as a whole, they are especially problematic for soil. Non-degradable substances that end up in the soil are stored there, where they threaten the quality of resources that are vital to people, animals and plants. The decrease in pollution levels of certain hazardous substances and nutrients can be measured in the air and water, but not necessarily in the soil. “The soil has a long memory; while it generally takes a long time for high pollution levels to be detected in the soil, it takes even longer to get them to drop”, explains Fabio Wegmann of the FOEN’s Soil Section. That is why the long memory of soil is used to compare how persistent pollutant levels have changed, as this is very informative.Studies in the early 1980s were the first to show that hazardous substances from the air are stored in the soil and threaten its fertility. The main culprits were heavy metals such as lead, cadmium, copper and mercury, which have a growth-inhibiting or toxic effect in large concentrations. They enter the soil partly from combustion engines and industrial smokestacks and partly from sewage sludge, various fertilisers and pesticides. To find out the changes in pollution levels and respond to them, the federal government set up the Swiss Soil Monitoring Network (NABO) in 1985: Samples are taken and studied on a five-year cycle at the one hundred or so sites located in forests, farm fields and parks across Switzerland. Three decades after monitoring began, various trends can be discerned from the reliable findings of the five data collection periods. The findings confirm that environmental measures are slowing soil pollution, but hint at new problems too. Pollution has also been partially eliminated from the soil. In recent years, cadmium levels have not risen in the top soil, and lead and mercury levels have even declined. In addition, the soil reflects the lower inputs from the air, thanks to more efficient filtering systems and the ban on leaded petrol. Furthermore, banning the application of sewage sludge has eased the burden on the environment.However, the concern is that the falling levels in the top soil samples analysed are not due to the disappearance of persistent substances. These substances may simply be stored. After all, they can enter the subsoil or be absorbed by plants and carried off with the harvest. It is also possible for heavy metals to occasionally enter the groundwater or be carried away by erosion.The primarily positive development has revealed findings on two metals: copper and zinc. Certain concentrations have an inhibiting effect on soil enzymes and also threaten the fertility of the soil. Both elements continue to accumulate, especially in intensively farmed grasslands and certain fields. Also, zinc debris from tyres goes into the air and then makes its way into the soil. But agriculture is clearly responsible for most of the pollution: Copper and zinc ends up in the soil when farmyard manure is intensively applied. They enter the fertiliser cycle as feed additives. Copper and zinc are essential trace elements, which are absolutely necessary for animals. Yet, according to the authors of a report on national soil monitoring from 1985 to 2009 that was published in 2015, their levels in feed could be greatly reduced without adversely affecting animal health.Cantons determine their own focuses“Intact soil is a quality that should be protected, like clean air and water”, argues Fabio Wegmann in favour of intensive soil monitoring. In addition to the federal government, the cantons also monitor soil because it is their responsibility to detect suspected pollution and start cleaning it up, as needed. Therefore, they focus their attention on various areas, depending on their needs. The Canton of Fribourg, for example, is particularly interested in key agronomic data due to its vast expanses of farmland. Since 1987, it has regularly tested soil quality at around 250 monitoring sites. After 25 years, the soil protection coordination group gives a positive assessment of the essential aspects of soil fertility: The top soil is stable, and so is the pH value. The latter, however, was only made possible by using acid-reducing lime fertilisers in the Molasse region. Furthermore, the surpluses of soluble phosphorous have decreased, which has reduced phosphorus leaching. But undesirable developments have also been discovered, which require adaptations in farming. Some of these include soil erosion and compaction and excess potassium levels due to high livestock density. Action is required for nutrient balances. Nutrient balances are also a topical issue for national soil monitoring. Nitrogen and phosphorous levels in grasslands were on the rise until 2000, when they stabilised but remained high. Potassium levels have continued to climb. For that reason, the NABO team wants to increase its analytical activities in this area so that it can identify non-sustainable farming methods and recommend actions. To support these activities, measurements are compared with data on nutrient inputs and outputs on the concerned parcels.Since all NABO samples are archived by Agroscope, a Swiss federal research institute, other characteristics of the samples can be analysed at any time whenever new issues arise. Accordingly, one of the NABO’s main duties is to prepare a well-documented and consistent soil sample archive for future generations.

Complex process: from sample to result

Acquiring comparable soil data over decades is a complex task because many factors between sample collection and analysis can influence the results. For that reason, there are detailed rules for this entire process, which falls within Agroscope's responsibility. To ensure that samples from all measuring periods are taken in the same area, every one of the 100 sample plots are 10 × 10 metres in size and are located with buried magnets and GPS data. Five mixed samples are taken from every 25 cores in the sample plots, and one is immediately deep frozen. This way, highly volatile pollutants can also be analysed. In the laboratory, foreign material is removed from the soil, which is then dried, ground and strained until it is ready to be measured for pollutants and other properties. Influential factors such as humidity, weather, agricultural crop and anomalies are noted when the sample is taken and are considered when the results are interpreted.