It is important to distinguish between macroplastics and microplastics in order to understand the extent of environmental pollution caused by plastics. The sources and pathways as well as possible effects on living organisms vary widely depending on the particle size. This distinction therefore provides indications of possible reduction measures.

Secondary microplastics are generated during the use and disposal of plastic products (e.g. abrasion from car tyres or fibres shed from synthetic textiles during washing) or in the decomposition of macroplastics into microplastics.

How plastics enter the environment

Based on the data available from studies and estimates for Switzerland, the FOEN estimates that around 14,000 tonnes of macroplastics and microplastics end up in Swiss soils, surface waters and their sediments every year. The largest proportion of these plastics comes from tyre abrasion (around 8,000 tonnes), followed by littering (around 2,700 tonnes) and other sources. The material flow diagram below shows the quantities of the largest sources, mechanisms for their retention and disposal and the sinks for plastics in the environment. 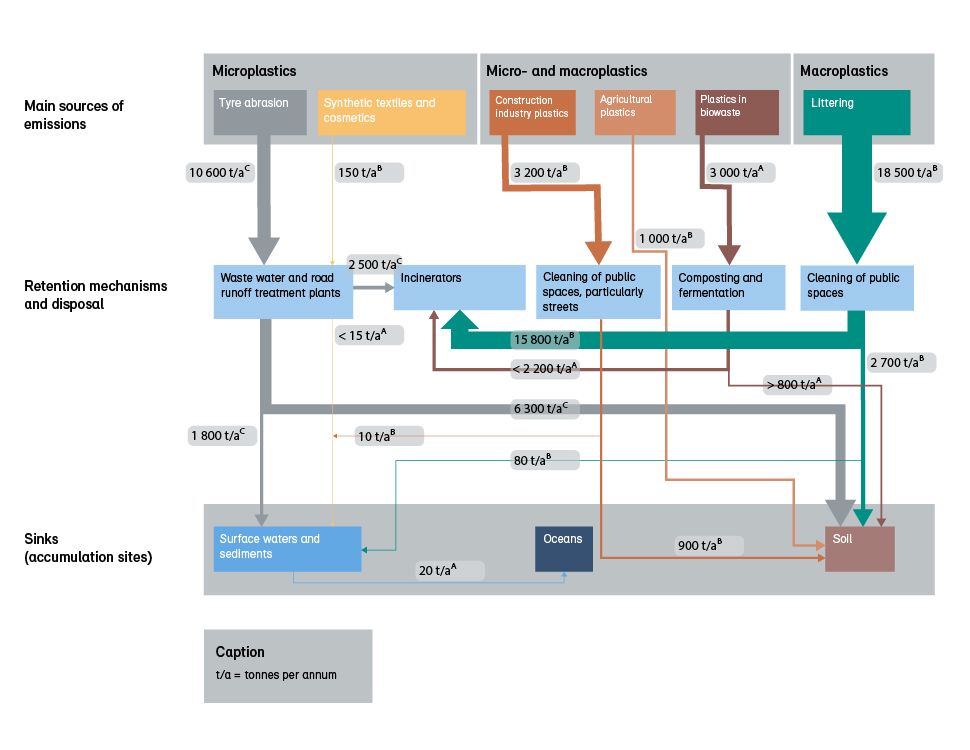 Material flow diagram of the main sources of emissions, the main mechanisms for their retention and disposal and the sinks for plastics in Switzerland.

All sources from the material flow diagram

B Kawecki, D., Nowack, B., Polymer-specific modeling of the environmental emissions of seven commodity plastics as macro- and microplastics, Environmental Science & Technology (2019). Commissioned by the FOEN

FOEN estimates are based on the following studies:

Main sources of emissions (cf. top row of boxes in flow chart)
Macroplastics mainly reach the environment because plastic waste is improperly disposed of (e.g. littering, plastics in biowaste collections). Microplastics are mainly released into the environment through the abrasion and degradation of plastic products (e.g. tyre abrasion) as secondary microplastics. The input of microplastics which are deliberately added to products (e.g. exfoliants) or reach waste water due to fibre abrasion from the washing of synthetic textiles, is low compared to the total amount entering the environment, but leads to significant deposits into surface waters.

Sinks (cf. bottom row of boxes in flow chart)
Plastics released into the environment remain long-term in sinks, e.g. in the sediments of watercourses and in the soil. According to present knowledge, the concentrations of plastics on and in soil are higher than those in surface waters. More attention must therefore be devoted to soil deposits.

Need for research into plastics in the environment

Because of the complexity of the material flows of plastics into the environment, our knowledge of various areas is insufficient. Extensive research activities are still required to close the knowledge gaps in the following areas:

Although isolated information already exists in all three areas, it is often subject to significant uncertainties and is hard to compare and interpret due to different methodologies and units. A workable measuring methodology still has to be developed for very small particles (e.g. tyre abrasion), since these cannot be recorded with the methods currently in use.

Current knowledge summarised for the public

In the «Plastics in the Swiss environment» overview report (available in German and French including summary in English), the current findings about environmental pollution by plastics (as of autumn 2019) based on published studies have been compiled and classified.

The FOEN has summarised this current knowledge and compiled its core messages for the public in a series of ten factsheets on the main topics concerning «Plastics in the environment».

Click on a box to open the relevant factsheet (PDF).

The debate on urgent measures to reduce the environmental pollution caused by plastics is in full swing in Switzerland as in other countries. This is demonstrated by the significant number of political initiatives on the subject of plastics which are currently being dealt with in the Swiss parliament and administration. In relation to the accepted postulates, Thorens Goumaz (18.3196) and Munz (18.3496), the FOEN is drafting a report on possible measures to reduce the pollution entering the environment through plastics and to stimulate a circular economy. With the accepted motion 18.3712 “Less plastic waste in waters and soil", submitted by the National Council's Committee for the Environment, Spatial Planning and Energy (ESPEC-N), the Swiss parliament is demanding that the Confederation should, together with the industries affected, examine and take measures to comprehensively and effectively combat environmental pollution caused by plastics, including the main sources of emissions.

The publication of our current knowledge of the topic is now laying the groundwork which the FOEN and the industries affected can use as a basis to identify and propose suitable measures.

The FOEN is also monitoring the EU's activities such as the «Green Deal» in which it decided at the end of 2019 to intensify efforts to reduce the pollution entering the environment through macroplastics and microplastics. The EU had already approved the European Strategy for Plastics in a Circular Economy («EU Plastics Strategy») in early 2018 and has thereby committed its member states to implement an array of measures.

For example, the EU has announced that short-lived disposable plastic products would be markedly reduced or even prohibited, the directive in question now has to be implemented within the member states by mid-2021. The FOEN is examining the applicability of the individual elements of the EU Plastics Strategy to Swiss conditions within the context of processing the parliamentary initiatives.

For further information on the EU Plastics strategy, go to this website of the European Commission:

The FOEN has also engaged with international bodies. For example, with the “Interest Group Plastics” in the “EPA Network” (European Network of the Heads of Environment Protection Agencies) and the Basel Convention’s international partnership on plastic waste (Plastic Waste Partnership). At the last Conference of the Parties to the Basel Convention on the Control of Transboundary Movements of Hazardous Wastes and their Disposal in May 2019, it was decided to make mixed plastic waste subject to control from 1 January 2021 onwards.

In future, all the countries involved (export, transit and import countries) have to give their consent to the planned transboundary movements in advance.

FAQ - Plastics in the environment

Plastics in the environment: FOEN publishes overview of current knowledge

5000 tons of plastic released into the environment every year

Rubber in the environment

Chevalley motion: When will oxo-degradable plastics be banned? (available in German, French and Italian)

Study «The Identity of Oxo-Degradable Plastics and their Use in Switzerland» (PDF, 2 MB, 31.03.2020)Commissioned by the FOEN

Technical article «Modellierung von Plastik in der Umwelt» (PDF, 1 MB, 05.05.2020)Article on a study commissioned by the FOEN (in German including summary in French)