Switzerland is not immune from the global climate crisis, but restoring natural landscape dynamicscan help in the fight against rising temperatures.

The effects of global warming are being felt in Switzerland in the form of summer droughts, heavy precipitation, winters with little snowfall, and more blisteringly hot days and tropical nights. Risks from natural hazards are on the rise, while population growth and land use are putting pressure on our landscapes and biodiversity. In 1997, the Federal Council adopted the Swiss Landscape Concept (SLC), which formulates a coherent policy and specifies binding spatial planning objectives designed to protect nature and landscape. Intact natural landscape dynamics can do a lot to limit the adverse effects of a warming climate. “We need solutions that take account of the new climatic conditions and offer added value for nature and people”, explains Claudia Moll, from the FOEN’s Biodiversity and Landscape Division, where she is responsible for landscape in built-up areas. This demands a coordinated approach by all actors as well as consideration of regional circumstances.

The European Landscape Convention, which Switzerland ratified in 2013, defines landscape as “an area, as perceived by people, whose character is the result of the action and interaction of natural and/or human factors”. This description implies that landscapes are constantly changing. The climate has a major influence on which organisms can live where, because each species has different requirements. As temperatures rise, certain species will migrate or become extinct and natural phenomena will change. This will profoundly alter the appearance of the landscape.

Events such as avalanches, landslides, fires, storms and floods, which are generally considered to be natural hazards, may be conducive to bio-diversity in certain circumstances, because they create new spaces in which pioneer species, and subsequently other plants and animals, can settle. Such “disruptive” events trigger natural dynamics and also help to rejuvenate populations. However, for this to happen, these events need to be relatively rare and spatially limited so that repopulation can take place.

The only places in Switzerland where natural dynamics are still given free rein are the high mountains and the Swiss National Park. At lower altitudes, livestock farming, winter sports facilities and hydropower plants have left visible traces. In the lowlands, humans have largely tamed nature, in particular by draining or channelling bodies of water to create land for agriculture, settlements, industry and transport routes, although there are still a few areas here and there that are left to develop unhindered, such as floodplains, forest reserves and core zones of nature discovery parks.

In some places, however, human activity has developed to an excessive degree, resulting in a loss of landscape quality and biodiversity, increased soil sealing and the construction of buildings and infrastructure in locations at high risk from natural hazards. “Climate change will result in more extreme events such as floods and landslides, which inevitably cause damage”, notes Moll.To remedy this, the original SLC set out clear guidelines for spatial development. The updated version, published in 2020, firms up the existing statutory mandates in areas such as nature and landscape conservation, forest, agriculture and waters protection.

A return to natural dynamics

Since 2011, the Waters Protection Act has required the cantons to rehabilitate their rivers and streams. In Frauenfeld (canton of Thurgau), for example, the bank of a channelled section of the Murg has been flattened and the river allowed to return to part of its original course, thus creating a floodplain. The river, willow thickets and an unfertilised meadow now offer habitats for a wide variety of animals and plants, while newly created footpaths and picnic and bathing areas provide pleasant places for recreation and relaxation. “With the increase in inward settlement development, easily accessible recreational areas are becoming more and more important”, explains Moll. Indeed, various studies have confirmed the positive impact of green spaces on health and social interaction.

Last but not least, the Murg-Auen-Park was also designed with climate change in mind: trees sequester CO2 as they grow and provide shade in the summer, making the park an attractive destination during hot spells. “Readily accessible on foot or by bicycle, such local recreational areas are pleasant places for residents to spend their free time”, continues Moll. In summary: restoring the natural dynamics of this section of the river has benefited biodiversity as well as the climate and local people.

Landscape design frequently entails working across communal boundaries, with numerous actors involved. A prime example of this is the rehabilitation of the River Aire in the canton of Geneva and across the border in France. “All stakeholders were involved in the plans: the farmers who had to give up their land, local council representatives, nature conservation organisations and residents”, explains the FOEN expert. The former canal has been partially filled in and is now an attractive promenade for local people, while the river is able to wend its own way through diamond-shaped dredged furrows.

The restoration of ditches, hedges, bushy areas and wetlands has created an ecological corridor through the agricultural and settlement area, which protects against flooding and serves as a recreational space for residents. Such functioning ecosystems strengthen the natural adaptability of habitats to the effects of climate change.

The beauty of Switzerland lies primarily in the quality of its landscapes. Land here is scarce, and needs to be used wisely. Striking a balance between economic growth and landscape conservation is difficult, but around our cities and agglomerations, where almost 85% of the population live, nature urgently needs more space. In most cases, restoring natural dynamics not only benefits biodiversity but is also a sound investment when it comes to mitigating the impacts of global warming, which in turn benefits human health and infrastructure.

Spatial planning relies on effective coordination between all the actors involved. “Experiences to date show that dialogue is extremely important. At the same time, we need to act with proportionality and preserve region-specific landscape features”, concludes Moll. Especially in the context of climate change, sustainable landscape development has real potential to enhance the well-being of people in Switzerland. 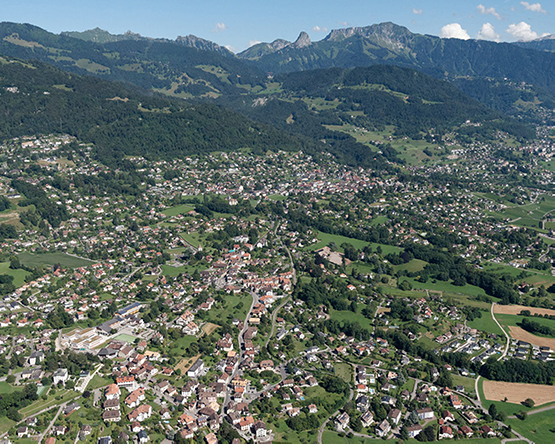 Comparison of pictures: The communes of Blonay and St-Légier-La Chiésaz (canton of Vaud) in 2016 (above) and in 1960.

The mean annual temperature in Switzerland has risen by 1.8 degrees Celsius since the second half of the 19th century. According to MeteoSwiss, we can expect longer and more frequent heatwaves in the future, combined with increased summer droughts. Heavy precipitation is becoming more frequent and intense, the glaciers are retreating, and there is less snowfall.

Permafrost in the Alps is thawing to ever greater depths, and the terrain is becoming unstable. All of this has consequences for living organisms, with a range of species likely to retreat to higher, cooler locations. Some will die out because they cannot move to new habitats quickly enough, while others will be displaced by competitors. The spruce, for example, could disappear from lowland areas. There will be a lack of water for winter wheat and potatoes, and certain insects will become more widespread as temperatures rise. Heatwaves will lead to increased mortality and water shortages. Permafrost thawing and heavy precipitation are resulting in ever more frequent floods, mud flows, landslides and debris flows. If the measures to curb global warming are not successful, this will have implications for our quality of life and for the landscape.