Collapsed buildings and bridges are among the horrifying images produced by earthquakes. However, the less spectacular consequences of earthquakes can also bring a country to a standstill, for example when key infrastructure systems are damaged. The FOEN is committed to ensuring better protection against earthquakes. 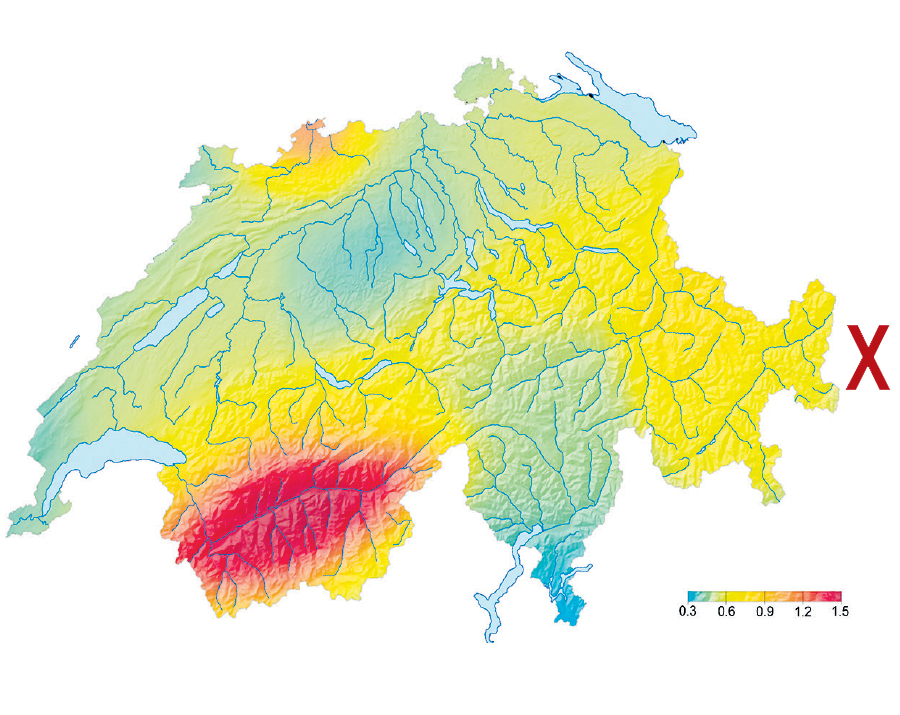 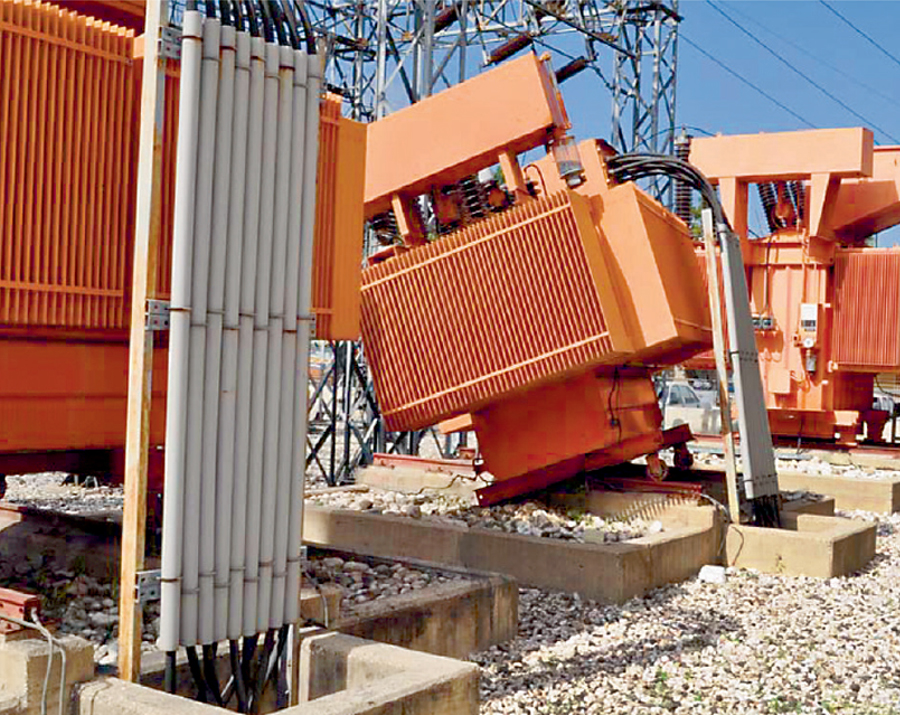 When the ground shook on 9 December 1755, Valais must have been seized by widespread fear and terror: the tremors are said to have been “hideous and horrifying” and, as one chronicler reported, everyone expected that “Brig and all of the surrounding stone buildings would obviously collapse in a heap and be buried under the rubble.”

The tremors were felt over a wide area and damage also arose, for example, in Bern and Lucerne. The victims were terrorised, not least, because the earthquake in Lisbon had claimed tens of thousands of lives just a month or so earlier. The enlightened public of the outgoing 18th century was highly aware of the threat posed by earth tremors. The philosopher Immanuel Kant (1724-1804) had even written an essay on the earthquake “which towards the end of the year 1755 shook a great part of the Earth”. In it he discussed both the disaster in Lisbon and the subsequent earthquake in “the mountains of Switzerland”.

All of Switzerland at risk

The threat posed by earthquakes has generally faded from the collective memory in Switzerland today as the last major earthquake took place almost 70 years ago. “Memory is dominated by the most recent natural hazards,” observes Sven Heunert from the Coordination Center for Earthquake Mitigation at the FOEN. After a winter of heavy snow, avalanches are seen as particularly dangerous and people fear flooding following a season of heavy rain. “And yet, earthquakes are the one hazard, from which no region is immune,” explains the earthquake expert.

The map of earthquake hazard zones produced by the Swiss Society of Engineers and Architects (SIA) shows that the hazard level for a large part of Switzerland is low, however the strength of the ground motions is not determined by the magnitude of the earthquake alone. A lot also depends on the local underground. In addition, the intensity of land use in the affected area plays a major role in the extent of the damage caused. Or as Seven Heunert puts it: “Conurbations like Lausanne or Bern are at greater risk than a small town in the Basel region – even if the seismic hazard there is greater.”

Anyone planning to construct a building should consider the possibility of seismic shocks. This would also be in the interest of the future owners: if their property is damaged by an earthquake, they must generally bear the cost alone. At present there is only one canton in Switzerland, in which the cantonal building insurance includes the seismic hazard.

To get to grips with this risk throughout Switzerland, the federal authorities launched a programme of earthquake mitigation measures in 2000. One of its core points consists in making federal buildings earthquake-proof. Another aims to protect the infrastructure in the federal authorities’ sphere of influence. This concerns, in particular, the electricity supply network, the national roads and rail transport system.

The extreme vulnerability of such network infrastructure is demonstrated by the fact that not even spectacular natural hazard events are needed to bring the lifelines of the economy and society to a halt: all it took on 28 September 2003 was for the branch of a fir tree to come too close to the power line over a Swiss Alpine pass. This caused a short circuit, the electricity jumped over to the tree and flowed into the ground. Or to put it in more technical language: an earth fault interrupted the supply to the north-south transit axis of this European electricity network. Due to faulty switching in Italy, this triggered a serious chain of reactions. “From 03:27 complete power failure in Italy,” is the Federal Office of Energy’s succinct statement in its report on the event.

In the event of an earthquake, locally limited damage to the supply network itself can affect the supply in remote areas or even bring it to a standstill. Moreover, earthquakes are such extensive phenomena that a large number of damage locations may be expected. Infrastructure networks that cover an entire country are even more vulnerable. To protect these networks against the consequences of earthquakes, the federal authorities are initially focusing on so-called vulnerability studies. These identify weak points, the protection of which is a matter of priority.

The FOEN carried out just such an analysis with the electricity sector. Based on the findings of the study, the Federal Inspectorate for Heavy Current Installations (ESTI) issued a new guideline on the seismic protection of the electricity power supply to prevent a national blackout. The guideline defines requirements for the relevant elements of the electricity supply network, for example the anchoring of transformers. It also specifies the minimum slackness of the conductor cables. This means that conductor connections must hang loosely enough so that they do not tighten in the event of abrupt movements of the underground and damage the equipment. The provisions are staggered on the basis of the earthquake zones and voltages involved and also take the local ground conditions into account.

Vulnerability analyses also reveal where preventive measures offer the greatest benefit. Transformers and switchgear are the key elements in the substations – that is the components in the electricity network that connect different voltage levels with each other. “A simple measure consists in preventing the control cabinets from falling over,” explains Sven Heunert. In many cases, it is sufficient to attach them to the wall using steel brackets. Ensuring sufficient stability for the transformers is also very useful. “If a large transformer falls over and is damaged, it takes months for a replacement to be delivered,” explains the FOEN expert.

The fact that unconventional measures can also contribute to achieving the desired objective is demonstrated by the Valais cantonal police organisation: it has secured its most important computers specially using strong Velcro fastener. In doing this, it adopts the kind of thinking which, in Sven Heunert’s view, should always lead the way: “Everyone must think about the safety of the support structure and ask: What could fall, what is at risk and what could be dangerous?”

A challenge for planners and builders

Overall, Sven Heunert regrets that not all training courses for planners and builders pay sufficient attention to earthquake protection. In many cases, little or no attention is paid to secondary building components, in particular installations. “Nobody feels entirely responsible for elements like a non-load-bearing wall or a transformer.” And yet it is precisely these elements that must be tailored to being exposed to the kind of forces that arise in the case of an earthquake.

Earthquake protection poses considerable challenges for the railways. Due to the diversity of its components, the complexity of its network is difficult to beat. “In addition to complex load-bearing structures like railway stations with high occupancies and bridges, the Swiss Federal Railways (SBB) also has its own electricity network and a complete communications network that controls it,” explains the FOEN expert. As a result the railway infrastructure is also suitable for making many planners aware about earthquake protection: “The railway company commissions numerous engineering consultancies which are forced focus on seismic safety as a result.”

In the case of the roads, bridges are the component at particular risk from earthquakes. Accordingly, the Federal Roads Office (FEDRO) has been surveying the seismic safety of the approximately 4,000 national road bridges based on a two-stage process. Up to now, weakness have been discovered in only a few structures which had to be remedied immediately.

One of these is the Chillon viaduct at Lake Geneva. At peak times, up to 7,300 vehicles drive across it. In view of this intensive use, it was clear that seismic safety measures had to be implemented in the context of the general maintenance planning. Many of the viaduct’s concrete joints were replaced with special seismic isolators. These act as elastomeric bearings, absorb the kinetic energy from the earthquakes and thus separate the structure from the movements in the underground.

The impressive structure on the banks of Lake Geneva is representative of a general trend in the development of infrastructure and settlement: complex and expensive structures have generated significant increases in the damage potential. If an earthquake as strong as that in Valais in 1946 were to arise in the vicinity of a major city today, it would cause damage costing between 2 and 5 billion euro.