Implementation and further development of the adaptation strategy

Adaptation to climate change is a process which must be periodically aligned with changing conditions. The action plan sets out the framework for the implementation of the adaptation strategy in the years 2020 to 2025. 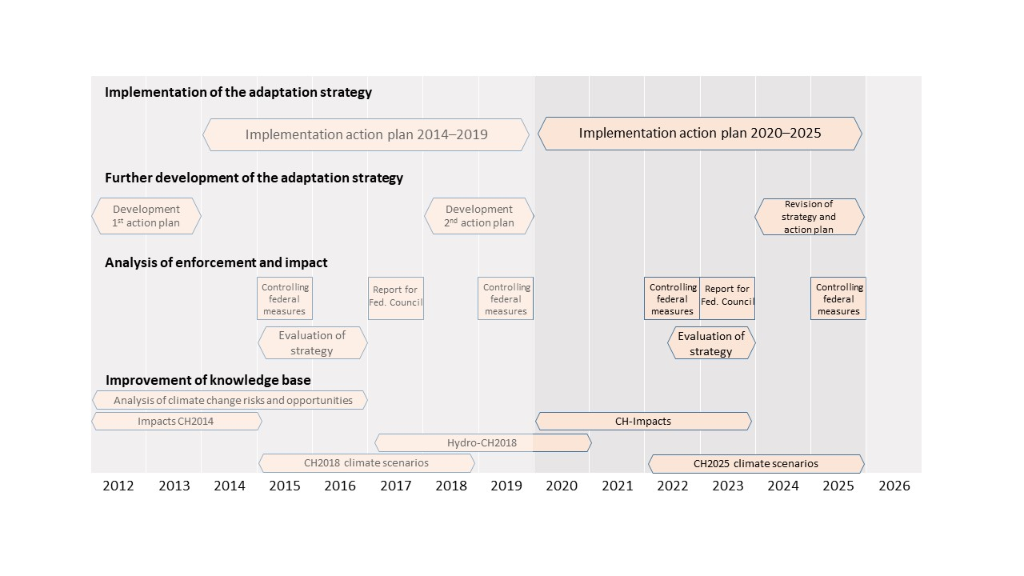 Implementation of the Federal Offices’ measures

The measures in the action plan contribute towards overcoming the challenges of climate change in Switzerland. They were prioritised by the Federal Offices which will set them out in specific terms and implement them as part of the relevant sector policy. The measures will be financed within the existing budgets.

In accordance with article 1 of the CO2 Act and article 15 of the CO2 Ordinance, the FOEN will manage the alignment of the adaptation measures at both federal level and between the Confederation and the cantons, taking the existing assignment of responsibilities into account.

The adaptation measures will be aligned on the federal level (horizontal coordination) as part of the existing collaboration between the Federal Offices and in the interdepartmental committee on the climate (IDA Klima).

Further development of the strategy

Adaptation to climate change is a process that must be continually brought into line with changing conditions. As climate change progresses, the need to respond to its effects with targeted measures increases. In particular, the extreme events in recent years, such as the high levels of heat stress during the summers of 2015 and 2018, the drought in the summer half-year 2018, the heavy rainfall in Zofingen in 2017 and in Lausanne and Sion in 2018, have highlighted that many areas are inadequately prepared for an increase in the intensity, duration and frequency of such events and that action is required in terms of adaptation to climate change. At the same time, knowledge about climate change, its effects and means of adapting are constantly being improved. All of these changes must be taken into account in the development of the strategy. A key task will be the review and, where necessary, amendment of the climate-related risks and opportunities in Switzerland based on the CH2018 climate scenarios, the hydrological baselines and hydro-CH2018 scenarios. Additional Federal Offices, which have not previously participated in the implementation and development of the adaptation strategy, will also be involved.

Analysis of the implementation and impact of adaptation to climate change