Residues of perfluorinated chemicals occur primarily at groundwater monitoring sites near rivers. The discharge of treated or untreated wastewater into surface waters and the subsequent infiltration of these waters into groundwater appear to be the major source of PFC in Swiss groundwaters.

Perfluorinated chemicals (PFC) are fully fluorinated organic compounds. Because of their extraordinary properties, in particular because of their water, grease and stain repellence as well as their thermal and chemical stability, they are used in diverse applications as for example waterproof clothing, non-stick coated cookware, stain-resistant surfaces, fire fighting foams, etc. 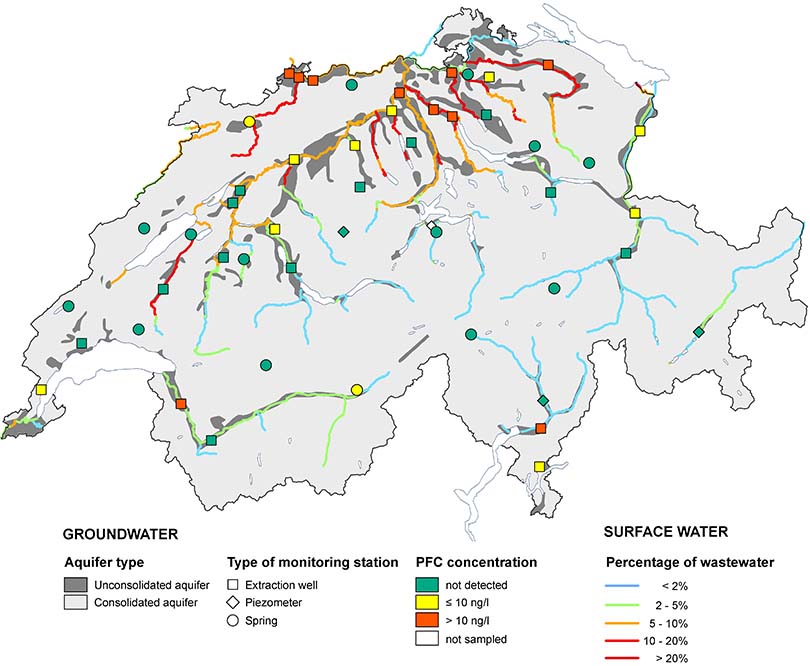 Concentration of perfluorinated chemicals (PFC) in groundwater and percentage of waste water in water courses with a discharge Q347 > 2000/l. Maximum value per NAQUA monitoring site.

Seven different PFCs were identified in the groundwater. The compound detected most frequently and also in the highest concentrations was perfluorooctane sulfonate PFOS. PFOS is persistent, bioaccumulative and toxic. In May 2009 it was added to the Stockholm Convention on Persistent Organic Pollutants.

Most monitoring sites at which PFC were detected are situated in unconsolidated porous aquifers, which are significantly recharged by the infiltration of river water. Elevated PFC concentrations occurred in particular in the groundwater along smaller and medium-sized rivers containing more than 10 % of wastewater. In some cases increased PFC concentrations in the groundwater were due to point sources.