The Federal Council adopted the Action Plan for the Swiss Biodiversity Strategy on 6 September 2017.

The measures contained in the Biodiversity Action Plan

Investments in biodiversity are worthwhile

Confederation and cantons decide on programme agreements in the area of the environment and thus engage jointly for nature conservation and forest biodiversity. Nature is blooming, but economy and society profit too.
This is the result of a survey conducted by FOEN among the cantons.

From Rio de Janeiro to the Action Plan

Switzerland, along with many other states, signed the Convention on Biological Diversity at the sustainability summit in Rio de Janeiro in 1992. The Convention’s 193 Member States (status as of May 2017) have set themselves the goal of ensuring the conservation of ecosystems and their services and of species and their genetic diversity. This is necessary to meet the needs of both today’s and tomorrow’s generations. The Convention’s provisions include the development of national strategies for the conservation of biodiversity. The Strategic Plan for Biodiversity 2011-2020 was passed at the tenth Conference of the Parties (COP 10, Nagoya, Aichi, Japan) in October 2010. This comprises, among other things, strategic goals known as the Aichi Biodiversity Targets and provides the individual states with a framework for the efficient and coherent implementation of the Convention.

The diagram presented below shows the most important events leading to the adoption of the Swiss Biodiversity Strategy (SBS) and the accompanying Action Plan.

Click to select the individual milestones and open the associated links. 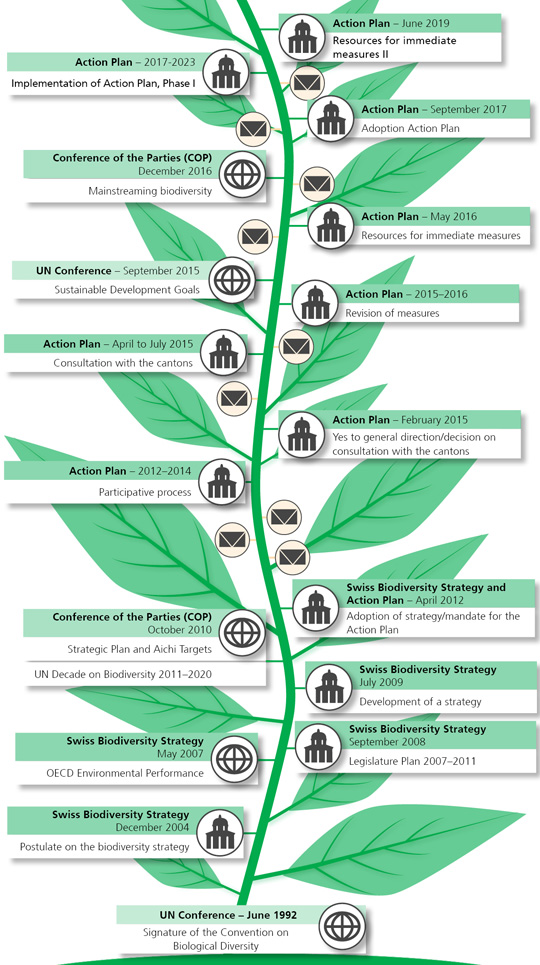 Biodiversity in Switzerland: Status and Trends

Results of the biodiversity monitoring system in 2016. 2017