If long-term climate targets are to be met, large quantities of CO2 will need to be removed from the atmosphere and stored on a permanent or long-term basis ('negative emissions'). A number of negative emissions technologies currently exist, based on biological approaches such as wood utilisation or technological approaches such as direct air capture. However, these approaches either have not yet been tested in practice or are not ready for deployment on the scale that would be required to affect the climate. Action should be taken to create conditions conductive to the development of negative emissions technologies.

In the Paris Agreement concluded in late 2015, the international community set itself the goal of limiting average global warming to significantly less than 2 °C above pre-industrial levels while aiming for a maximum temperature rise of 1.5 °C. These goals require a step change in climate change mitigation strategies.

The Fifth Assessment Report of the Intergovernmental Panel on Climate Change (2013/14) and the 2018 Special Report on Global Warming of 1.5 °C – which together provided the scientific basis for the Paris Agreement – show unequivocally that global CO2 emissions must be reduced to net zero by mid-century if these targets are to be reached. . The Federal Council therefore decided, in late August 2019, to set a more ambitious long-term climate target: by 2050, Switzerland should not emit more greenhouse gases than can be absorbed naturally or by technical means (net zero). To the best of our current knowledge, this balance cannot be achieved – globally and in Switzerland – without negative emissions technologies.

What are negative emissions technologies?

Negative emissions technologies (NETs, also known as 'carbon dioxide removal') permanently remove the greenhouse gas carbon dioxide (CO2) from the earth's atmosphere. They intervene in the earth's carbon cycle, directly addressing the root cause of climate change. By contrast, solar radiation management (SRM) aims to reduce the amount of solar radiation reaching the earth's surface (see Figure 1). In the past, targeted large-scale interventions in the climate system involving NETs and SRM have been referred to by collective terms such as 'geoengineering' and 'climate engineering'. However, such generic terms have proved misleading given the fundamentally different nature of the two approaches.

Figure 1: Humans can respond in various ways along the climate change causal chain. 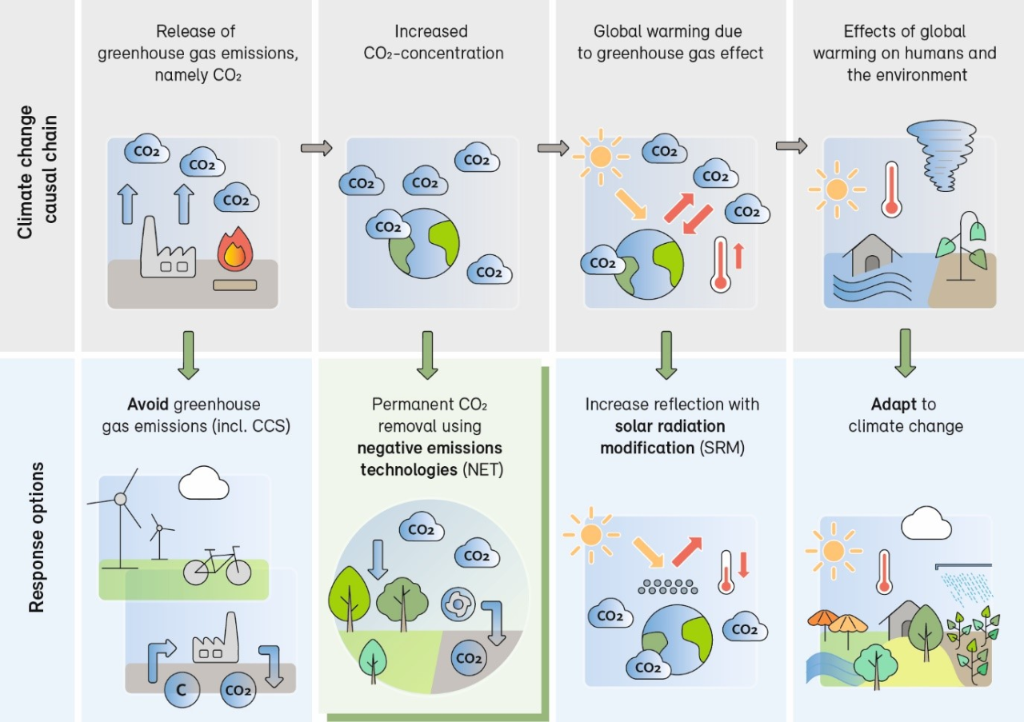 The central role of NET in the latest IPCC reports is a consequence of previous failures in global climate protection. According to (virtually) all model calculations, the Paris climate goals can now only be met by incorporating such technologies. Nevertheless, the net zero target can and must be achieved primarily by moving away from fossil fuels (especially oil, gas, petrol and diesel).

The Federal Council approved in September 2020 in response to postulate Thorens Goumaz (18.4211) a report on the importance of negative CO2 emissions for Switzerland's future climate policy. The report provides a systematic overview of the currently known NETs. It presents current knowledge about the potential of NETs to support Swiss climate policy and outlines possible courses of action to achieve the goal of a climate-neutral Switzerland by 2050.

We know of a number of NETs that can use biological or technological approaches to remove CO2 from the atmosphere and store it on a more or less permanent basis. Essentially, CO2 can be captured in biomass (through photosynthesis) or by chemical means (using air filters or mineral sequestration). The CO2 (or, with some techniques, just the carbon (C)) is then stored in biomass on the earth's surface (e.g. in wood), in the soil, in the geological substrate, in minerals or in the seabed (see Figure 2). For these techniques to generate negative emissions to a degree that affects the climate, the CO2 must be stored for a long time, i.e. for several decades or preferably for centuries. CO2 stored in forest biomass or in humus in the soil is more liable to end up back in the air than CO2 sequestered deep underground or in minerals, due for example to exceptional events (such as forest fires) or intensive soil tillage.

Figure 2: There are various approaches for removing CO2 from the atmosphere. 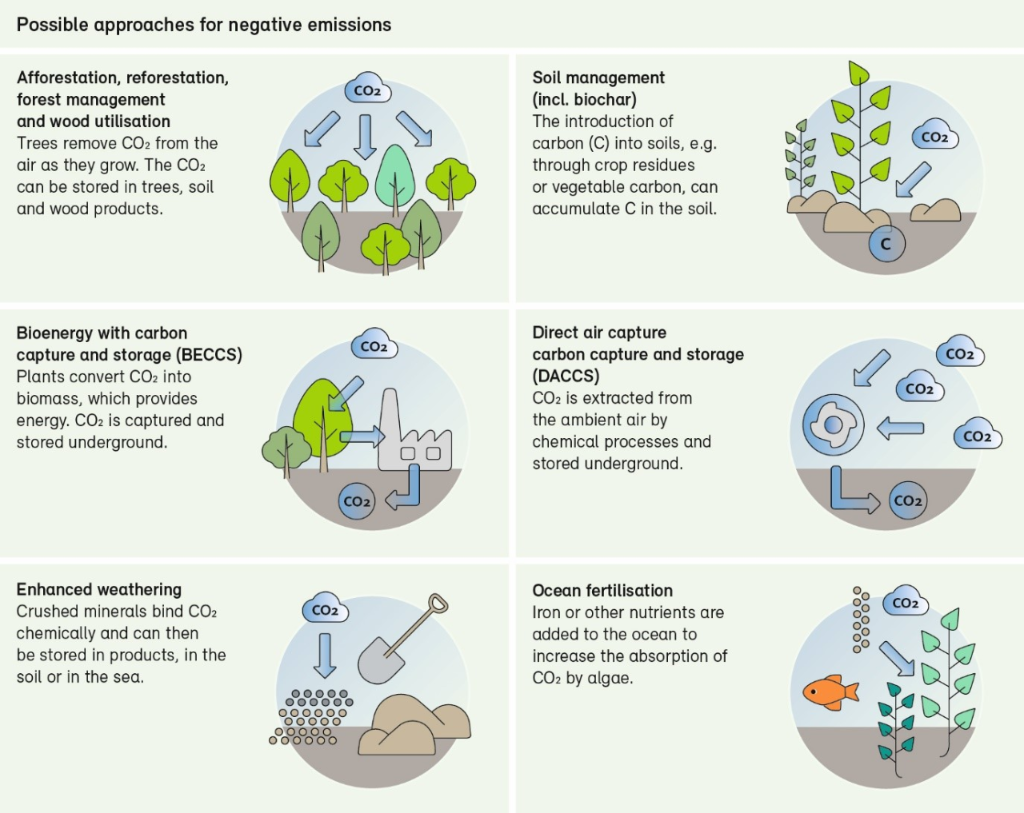 Figure 2: There are various approaches for removing CO2 from the atmosphere. Source: FOEN illustration based on content from the Mercator Research Institute on Global Commons and Climate Change (MCC).

The issues surrounding NETs are complex. One the one hand, there is increasing recognition of the need for such technologies; on the other, there is a risk that their potential may be overestimated, resulting in urgently needed emission reduction measures being deferred or not being implemented at all. Failing to implement such measures would be fraught with risk as, without exception, all the proposed NETs either have not yet been tested in practice or are not ready for deployment on the scale that would be required to affect the climate.

Moreover, many fundamental issues, such as costs or conflicting objectives, have not been sufficiently explored, meaning that the prospects of implementing NETs in specific circumstances are far from clear. For these reasons, negative emissions technologies are not an alternative to immediate massive emission reductions. Realistically, they could at best be efficient and effective as a supporting part of a larger package of measures. However, this would require their research and development to be accelerated and boosted so that the technologies reach maturity as quickly as possible.

Removing CO2 from the atmosphere on a permanent or long-term basis (for several decades at least, preferably for centuries) is key to achieving negative emissions. However, a trait shared by all natural sinks is that they are reversible and can quickly start to release their CO2. This must be taken into account in the regulatory design of measures with a view to ensuring a positive overall climate impact.

What is Switzerland's position?

While the societal conversation referred to above is barely taking place, there is a growing realisation that the Paris climate goals and the Swiss climate goal for 2050 can no longer be met by emission reductions alone. As the Federal Council states in its report in response to postulate postulate 18.4211 Thorens Goumaz, there is, due to the climate goals, a need to set the framework for research and expansion of NET today.

Given what we know about the dangers of unchecked climate change and the so far inadequate efforts to replace fossil fuels, Switzerland's long-term climate strategy will have to include NETs. Their primary purpose will be to offset 'unavoidable' emissions so that the overall net zero target for all greenhouse gases can be met by 2050.

Which emissions will be viewed as unavoidable will be a matter for public debate. The inclusion of negative emissions in the strategy does not guarantee that the required potential for such emissions exists in Switzerland. Further research and development will be needed to confirm and gradually expand this potential.

In contrast to NETs, Switzerland is not actively pursuing SRM approaches as part of its climate policy. However, it is playing an important international role with regard to this issue. This is because one of the most urgent tasks is to develop an ambitious international framework for regulating and monitoring research and development activities linked to large-scale interventions in the climate system (governance).

In March 2019, Switzerland and various other countries submitted a draft resolution to the fourth session of the United Nations Environment Assembly (the governing body of the UN Environment Programme (UNEP)), which would have been a first step in this direction. However, the motion failed to achieve a consensus and was rejected. The challenge of governance remains to be addressed.

Federal Council aims for a climate-neutral Switzerland by 2050