Plastics have no place in the environment. Nevertheless, around 14,000 tonnes of plastics end up in Switzerland’s soil and waters every year – primarily due to the abrasion and decomposition of plastic products and improper disposal of plastic waste. Plastics then accumulate in the environment because they only degrade very slowly, which is why the amount released into the environment must be reduced to the absolute minimum in order to avoid damage as far as possible.

The environmental impact of a versatile material

One million tonnes of plastics are used every year in Switzerland. They are used both in durable products such as window frames and car body parts, and in short-lived products such as packaging and disposable tableware. Every year, around 790,000 tonnes of plastics are thermally processed in waste incineration plants and cement works or are fed back into the material cycle through recycling and reuse.

As a result of their versatility and durability, plastics are found everywhere in the world: in oceans, Arctic ice, mountains, soils, rivers, lakes, sediments, air and in the digestive tract of living organisms. What is more, there are numerous different types of plastic with a wide variety of additives.

It is important to distinguish between macroplastics and microplastics in order to understand the extent of environmental pollution caused by this material. How they enter the environment, as well as the possible effects on living organisms, varies widely depending on the size of the plastic particles. This distinction allows us to decide which measures are best for reducing plastic waste.

Primary microplastics are plastic particles that are deliberately manufactured as such and added to products (e.g. artificial turf infill, fertilisers, plant protection products, cosmetics, household and industrial cleaners, and paints and varnishes).

Secondary microplastics are generated during the use and disposal of plastic products (e.g. abrasion from car tyres, fibres shed from washing synthetic textiles, and shredding processes) or during the decomposition of macroplastics into microplastics.

How plastics are released into the environment

Based on the data available from studies for Switzerland, the FOEN estimates that around 14,000 tonnes of macroplastics and microplastics end up in Swiss soil, surface waters and sediment every year. The majority of these plastics enter the environment through tyre abrasion (around 8,900 tonnes) and littering (around 2,700 tonnes), as well as from numerous other sources. The material flow diagram below shows the quantities of the largest sources of these plastics, mechanisms for their retention and disposal, and plastic sinks (i.e. accumulation sites) in the environment. 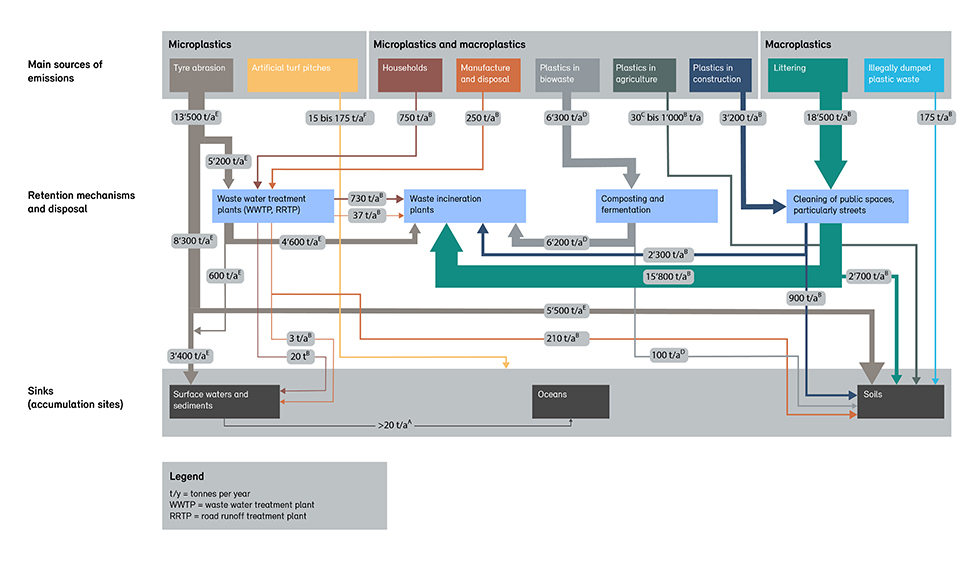 Material flow diagram of the main sources of emissions, the main mechanisms for their retention and disposal and the sinks for plastics in Switzerland.

Sources for the material flow diagram plus additional information

Sources for the material flow diagram

A The FOEN's estimate of the amount of microplastics entering the oceans via Swiss watercourses is based on the following study:

Commissioned by the FOEN (in French including summary in English).

Commissioned by the FOEN.

(in German and French)

E Based on the following studies:

Retention mechanisms and disposal (see middle row of boxes in the material flow diagram)
A number of established measures, such as waste water treatment, waste disposal and street cleaning, significantly reduce plastics being released into the environment. Swiss residential waste and waste water management sectors and local authorities substantially contribute to ensuring that plastics do not end up in the environment. However, not all emissions can be fully captured by such treatment measures and retention mechanisms. Litter and tyre abrasion, for example, enter waterbodies and soils via rainwater surface runoff or through airborne transmission.

Sinks (see bottom row of boxes in the material flow diagram)
Plastics released into the environment remain long-term in sinks, i.e. in the sediments of waterbodies and in soils. According to current knowledge, in Switzerland larger amounts of plastics are released onto and into the soil than into surface waters. Oceans polluted with microplastics and macroplastics is an additional problem internationally.

Need for research into plastics in the environment

Due to the complexity of the material flows of plastics in the environment, there are various areas in which there is an insufficient level of knowledge. Extensive research activities in the following areas are still needed to close the knowledge gap:

Although some information exists in all three areas, it is marred by uncertainties because the differing methodologies and units used make the data difficult to compare and interpret. A practical measurement methodology still needs to be developed for very small particles (e.g. tyre abrasion), as they cannot be detected with methods currently in use.

Summary of current knowledge for the general public

The Plastics in the Environment report, in response to the postulates Thorens Goumaz (18.3196), Munz (18.3496), Flach (19.3818) and the CVP Group (19.4355), gives an overview of the subject (as of summer 2022). The first part of the report describes the plastics life cycle from manufacture to disposal. It then goes on to present the most common sources of plastics and how they enter the environment, plastics sinks, and the effects on the environment and health. The second part of the report highlights ongoing and previously implemented measures, as well as potential for improvements.

The FOEN has summarised current knowledge and core messages for the general public in ten factsheets on the main topics of the Plastics in the Environment report (as of spring 2020). The factsheets will be updated soon.

Minimising plastic pollution in the environment

Plastics do not decompose in the environment, or if they do, only over a very long period of time – sometimes as much as several hundred years. They then accumulate in the environment, which is why their release must be reduced to the absolute minimum in order to avoid damage as far as possible.

The debate on urgent measures to reduce the environmental impact of plastics is in full swing in Switzerland, as it is in other countries. This is demonstrated by the significant number of political initiatives on the subject that are currently being dealt with in Parliament and the public administration. The Plastics in the Environment report, in response to the postulates Thorens Goumaz (18.3196), Munz (18.3496), Flach (19.3818) and the CVP Group (19.4355), sets out the potential for improvements. With the adopted motion 18.3712 “Less plastic waste in waters and soil", submitted by the National Council's Committee for the Environment, Spatial Planning and Energy (ESPEC-N), Parliament is demanding that the Confederation, together with the industries concerned, should examine and take measures to fully and effectively counteract environmental pollution caused by plastics, including its main sources of emission.

A significant amount of environmental impact caused by plastics arises from primary production, which largely takes place abroad. This means that global problems can only be solved through joint action, which is why the FOEN also advocates the sustainable use of plastics at international level and participates in international bodies.

In March 2022 the UN Environment Assembly (UNEA) decided to start negotiations on a legally binding agreement on plastics. Negotiations will start at the end of 2022 and are to lead to a Plastics Convention in 2024. The aim is to reduce the environmental impact of plastics throughout their full life cycle. Switzerland is in favour of an ambitious agreement and is a member of the High Ambition Coalition (HAC), a group of countries committed to ensuring that the Plastics Convention results in the elimination of plastics from the environment by 2040.

In addition, Switzerland is a party to the Basel Convention on the Control of Transboundary Movements of Hazardous Wastes and their Disposal (in German, French and Italian). At the Conference of the Parties to the Basel Convention in May 2019, the Swiss delegation actively endorsed making mixed plastic waste subject to control from the beginning of 2021. This means that all countries concerned (i.e. exporting, transit and importing countries) must give their prior consent to planned transboundary movements. Further information on the implementation of the new regulations in Switzerland: Transboundary movement of waste

A public-private partnership on plastic waste was established under the Basel Convention (Plastic Waste Partnership). It aims to mobilise resources, interests and expertise from industry, government, academia and civil society in order to improve the management of plastic waste and, where possible, prevent it being generated.

In 2015, the EU published the first Circular Economy Action Plan, in which plastics were one of five priority areas. This was followed in 2018 by the European Strategy for Plastics in the Circular Economy (EU Plastics Strategy), which outlines measures to reduce Europe's dependence on imported fossil resources and cut CO2 emissions. One of the overarching goals of this strategy is to ensure that all plastic packaging on the EU market is either reusable or recyclable in a cost-effective manner by 2030.

In 2019, the EU Plastics Strategy was fleshed out in the Directive on the reduction of the impact of certain plastic products on the environment (Single-Use Plastics Directive, Directive (EU) 2019/904). This requires member states to take a series of measures aimed at reducing single-use plastic products. The EU directive introduces bans on a number of products, including oxo-degradable plastics, drinking straws and disposable plastic cutlery. However, it also provides for awareness-raising measures, requirements for products to be labelled with a new logo indicating the proper method of disposal, greater producer responsibility, and the reduction of certain single-use plastic products such as beverage cups. EU member states must incorporate appropriate measures in their national legislation over the next few years. Switzerland is not required to implement the Single-Use Plastic Directive; however, the FOEN is monitoring the EU's work and continuously assesses what changes might be made to Swiss legislation.

In 2020, the EU published a new Circular Economy Action Plan, which further develops the measures adopted in its plastics strategy. It focuses on proposals for mandatory requirements on recycled plastic content and for the creation of a clear policy framework for labelling biodegradable and bio-based plastics. The action plan also seeks to bolster implementation of the Single-Use Plastics Directive and tackle the occurrence of microplastics in the environment (for example by restricting microplastics intentionally added to products such as in cosmetics).

At European level, Switzerland's representatives also participate in various working groups focused on plastics such as the Plastics Interest Group of the Network of the Heads of European Environmental Protection Agencies (EPA-Network).

Further information on the work of the EU: Plastics

FAQ - Plastics in the environment

Plastics in the environment: FOEN publishes overview of current knowledge

5000 tons of plastic released into the environment every year

Rubber in the environment

Chevalley motion: When will oxo-degradable plastics be banned? (available in German, French and Italian)

(in German and French)

Study «IDHEAP: Comparing European and Swiss Strategies for the Regulation of Plastics» (PDF, 3 MB, 30.06.2021)Commissioned by the FOEN

Study «The Identity of Oxo-Degradable Plastics and their Use in Switzerland» (PDF, 2 MB, 31.03.2020)Commissioned by the FOEN

Technical article «Modellierung von Plastik in der Umwelt» (PDF, 1 MB, 05.05.2020)Article on a study commissioned by the FOEN (in German including summary in French)