Population and economic developments in Switzerland over the past hundred years have left their traces in the soil and subsoil: In all there are some 38'000 polluted sites to register (landfills, industrial and commercial sites as well as accident sites) of which some 4'000 are considered to be in need of remediation and thus classified as contaminated sites. The main natural resource affected is ground water. The bill for these "sins of yesterday": Investigation and remediation costs amounting to an estimated 5 billion Swiss Francs.

Perception of the danger that various kinds of waste pose to the environment has already led to tighter regulations for constructing and operating landfills, and for handling environmentally dangerous substances. The use of certain substances is even forbidden. 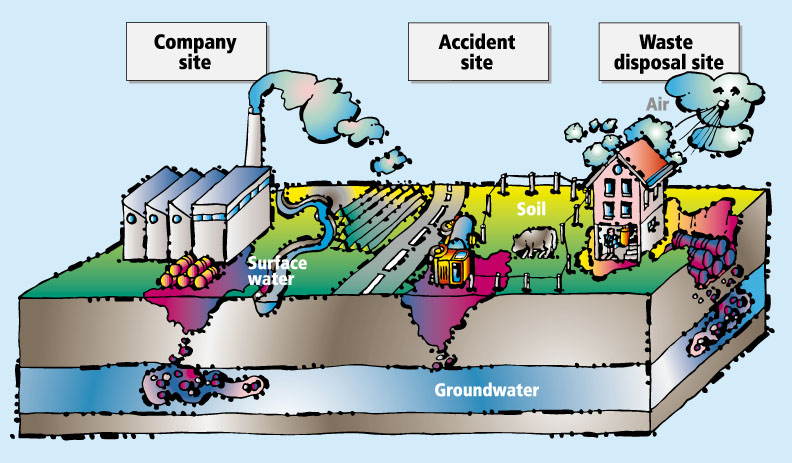 These tightened-up regulations are expanding their range of effectiveness such that the possibility of new contaminated sites occurring be severely limited in future. But this set of preventative regulations has only been in force a few years; it is obvious that it cannot remove the contamination built up over the past decades. The fact that contaminated site issues did not arise in Switzerland as early as they did in other European industrial countries and that they are not generally associated with outraged scandal has mainly to do with the following characteristics of Switzerland: 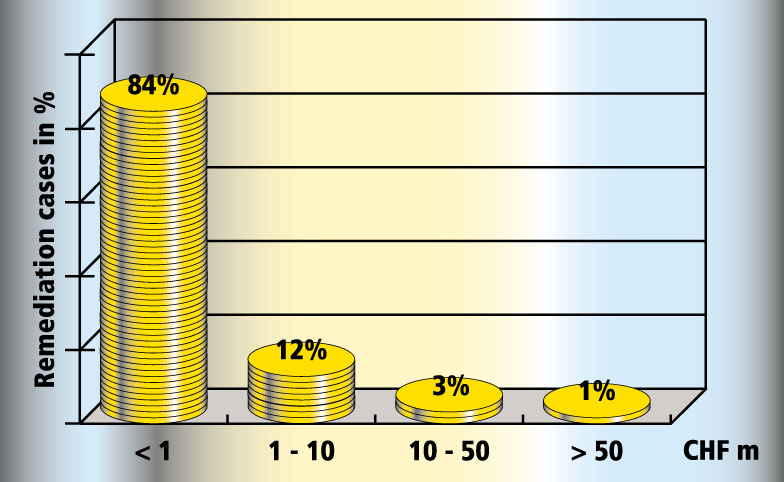 Not all remediations are a matter of millions: Many small cases cost a few hundred thousands up to one million Swiss francs. Remediations costing tens of millions of francs or more are, happily, the exception.

Risk assessment: Sites must be evaluated on a case-by-case basis

That contaminated sites nevertheless present a serious problem and that numerous conflicts exist concerning sensitive use is largely due to the peculiarities of the Swiss central plateau:

Contaminated sites management begun in many cantons at the end of the 80s concentrated initially on researching the location of landfill sites. Not least as the result of various construction projects it was recognized, however, that specifically industrial and commercial sites can also have serious environmental impacts. Barely a single canton was to be spared from contamination-related environmental damage.

The Contaminated Sites Ordinance in force since 1 October 1998 has instituted the urgently needed legal security with regulations for uniform and economically sensible remediation work in all cantons. In producing them Switzerland has learned from the experiences of other countries such as Germany, the Netherlands and the USA. The procedure for contaminated sites management described in the Ordinance thus fits well and without fundamental discrepancies within the corresponding international regulations. Uniform conditions offer authorities as well as those obliged to undertake remediation the requisite basis for decision making, enable a rapid and efficient process and prevent undesireable regional differences.