28.01.21 - For some years now, climate change has been increasingly leaving its mark on the landscape. Mountain areas are particularly affected by the rising temperatures. In Bergell (GR), local authorities have initiated a project that carefully integrates protective infrastructures against natural hazards into the historic cultural landscape. A good reason, therefore, to nominate Bregaglia for the Landscape Award of the Council of Europe.

Joy and sorrow are often close together. In 2015, the Swiss Heritage Society honoured the municipality of Bregaglia (in German: Bergell) with the Wakker Prize for the careful handling of its valuable landscape and building culture (Baukultur) qualities. Two years later, the valley saw this very precious heritage acutely endangered: a rockfall that occurred on the northern flank of Piz Cengalo on August 23, 2017, subsequently led to several debris flows that pushed their way to the edge of the village center of Bondo in the Val Bondasca. They destroyed bridges, roads and houses and separated the villages of Bondo and Promontogno, which had historically grown together.

Already after a landslide in December 2011, debris flows had come down from the Val Bondasca in the summer of 2012. As a result, the municipality built a large catch basin. "The construction was controversial, because we had to sacrifice a campsite and a beautiful forest for it," says Anna Giacometti, president of the municipality at the time. "But in retrospect, we have to say: thank goodness we built the basin!". Because otherwise the mud masses with the boulders as high as houses would probably have reached far into the village of Bondo. "Nature does not ask whether it destroys landscape and building culture (Baukultur)" explains Anna Giacometti. "It is then up to the people to make the reconstruction beautiful and safe". This dichotomy of beauty and protection earned the Bregaglia project a nomination for the European Landscape Award.

It was clear to those responsible on site that Bregaglia - like many places in mountain areas - must continue to expect rockfalls and debris flows in the future. This is all the more true as extreme precipitation will increase with climate change and the ground, which is permanently frozen at high altitudes, will thaw and lose stability. It was therefore necessary not only to repair the damage caused by the debris flow, but also to protect the villages and infrastructures in the valley from future events and to integrate the necessary protective structures into the landscape. The municipality therefore first conducted an analysis of recent incidents, and then used this as a basis for designing hazard scenarios and drawing up a preliminary project for the new consolidation and traffic facilities. This preliminary project then served as the basis for a competition in which planning teams were invited to submit proposals for the design of the new facilities.

A jury consisting of representatives of the municipality of Bregaglia, the canton of Graubünden (Grisons) and various experts in architecture, engineering, landscape planning and architecture as well as hydraulic engineering selected from nine proposals the one that would best integrate the structures for protection against natural hazards and the newly constructed traffic routes into the townscape and the rural landscape. 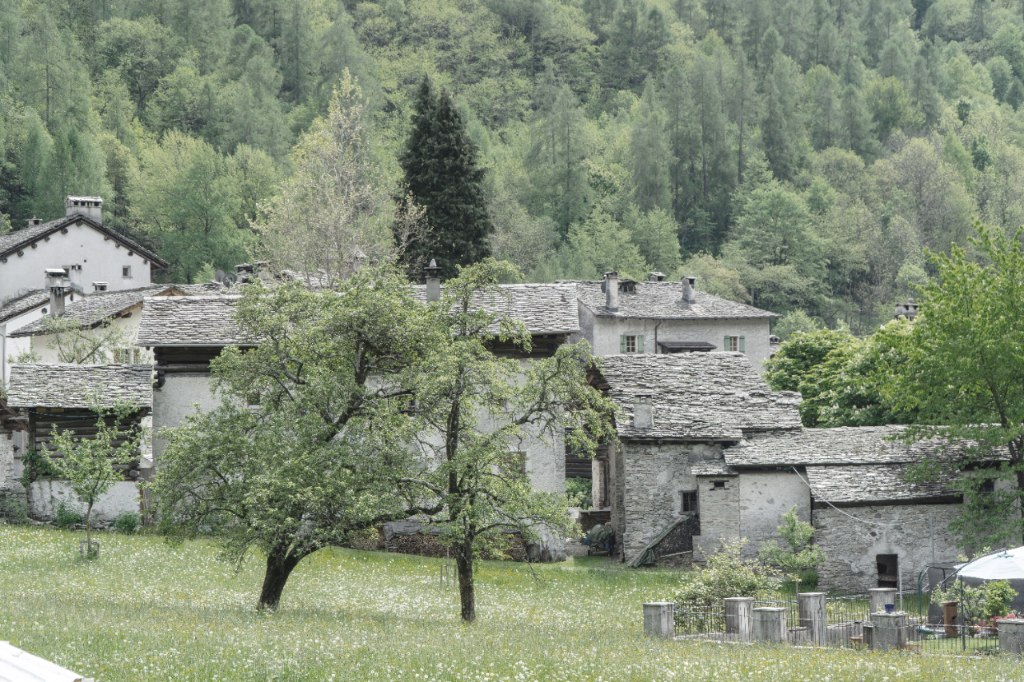 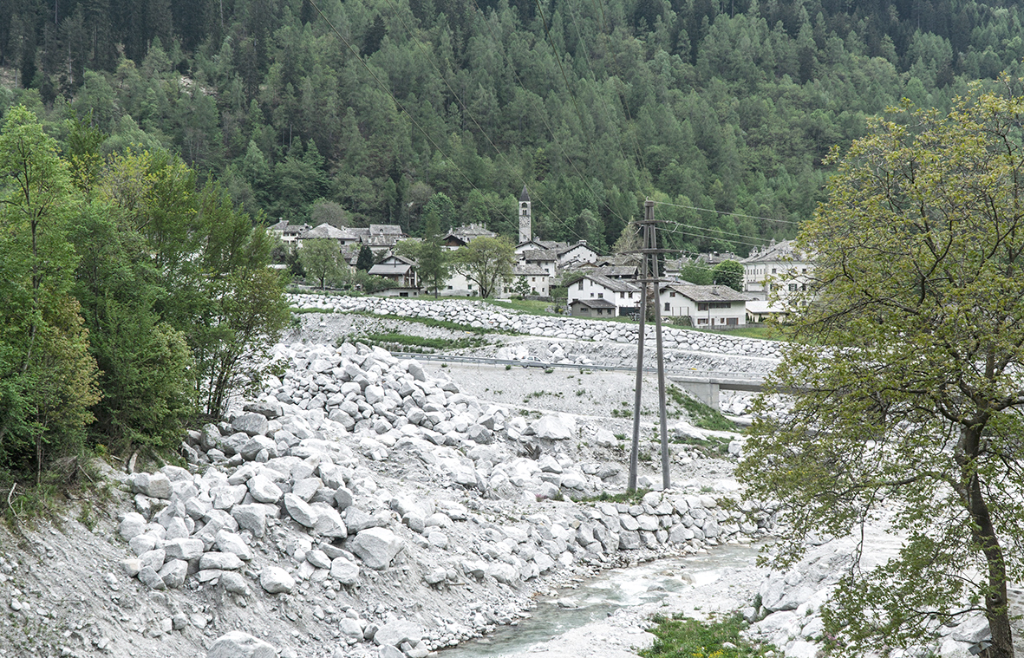 The imposing temporary protective structures in front of the village of Bondo, protected by the Federal Inventory of Constructed Sites of National Importance (ISOS) 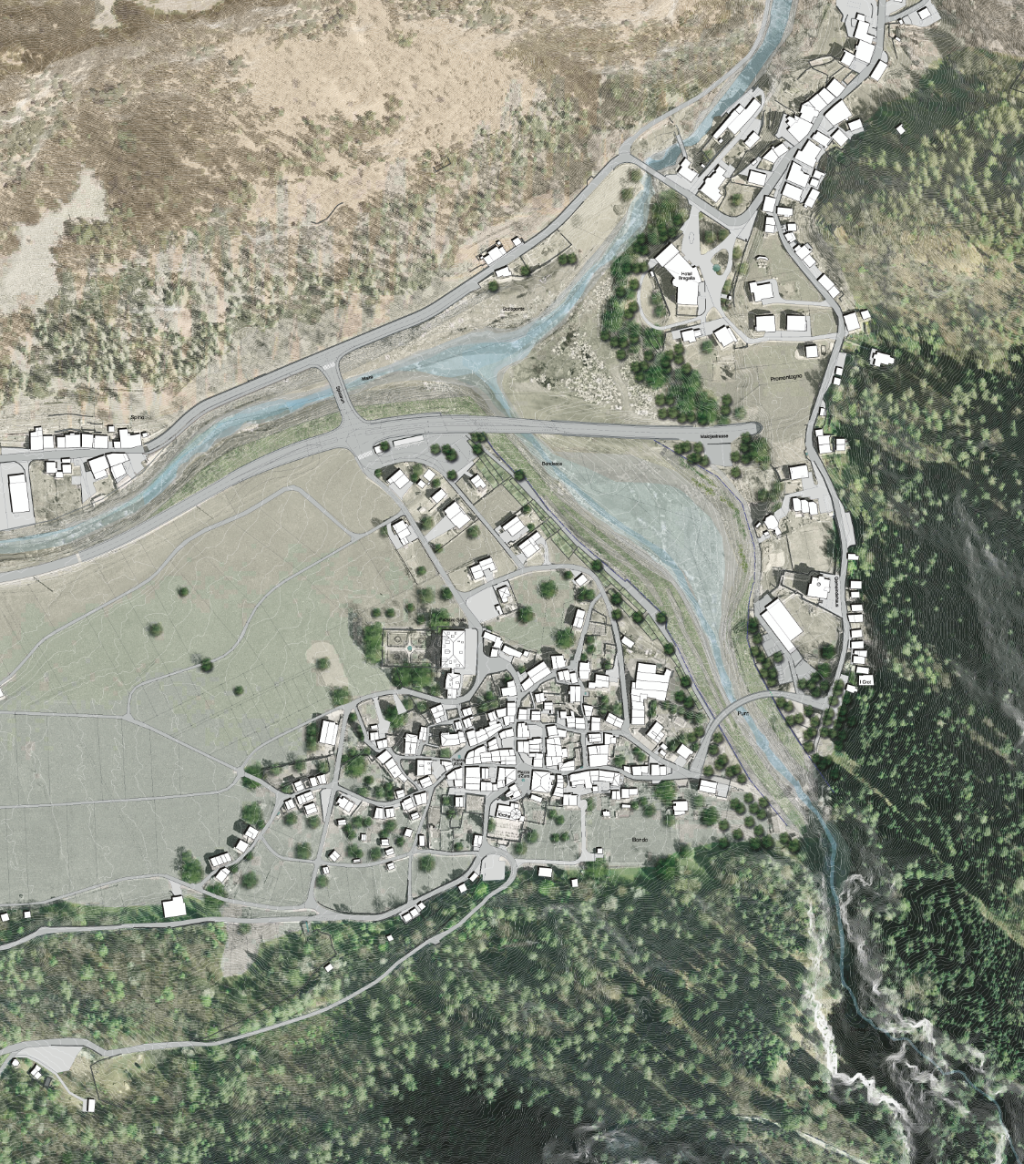 The winning project bears the title "Strata" ("layers", from the Latin "stratum") - and its name says it all: It carries over the strips of rock bands and natural stone walls that characterize the landscape into the newly designed traffic and settlement area. Walls will line the roads and paths, and the edges of the basin, which is to absorb any mudslides in the future, are planned as terraces. The new bridges, in turn, with their slightly arched lower line, are intended to follow the tradition of the Bregaglia arch bridges - and at the same time improve the flow and thus minimize the potential damages by floods and debris.

From the point of view of Fernando Giovanoli, president of the municipality, who was also a member of the jury as an architect, the winning project is impressive in its entirety: "The traffic routing works well, and underground passages were proposed as an original solution to empty the catch basins". The project owes its high quality to its interdisciplinary approach: "As a member of the jury, one had the impression that a team was at work that solved all the sticking points together." For Bregaglia, it is a work of the century that will also be important for future generations and must therefore be convincing as a whole, says the president of the municipality.

The Bregaglia project also convinced the jury, which has to determine the Swiss candidature for the Landscape Award of the Council of Europe. The exemplary approach chosen by the municipality to preserve its high cultural landscape values and its architectural heritage and yet to protect it as best as possible from natural hazards convinced in favour of the nomination. The strength of the Bregaglia approach lies in the fact that it does not attempt to undo the destruction caused by the landslide, but rather makes room for foreseeable natural events in the landscape. It also sets standards for other communities that have to live with natural hazards.

An award for high landscape values

The Landscape Award of the Council of Europe is awarded every two years. All countries that have signed the convention are eligible to apply. Switzerland took part for the first time in 2019 - and came out on top with the Aire renaturation project near Geneva. For its candidatures, the Swiss jury proposes landscape projects that have already been recognized by other organizations such as the Swiss Heritage Society.

Climate change increases the dynamics of the landscape

Since the late 19th century, warming in the Alpine region has been about twice the global average. If the frozen subsoil melts at altitude, mountain slopes start to slide. In addition, extreme precipitation is becoming more frequent and more intense, so that the risk of debris flows is also increasing. As a result, more debris ends up in streams and rivers, which increases the cost of watercourse maintenance. Ultimately, it is usually various factors that increase the risk of natural hazards. It is clear, however, that the dynamics and character of the landscape must be taken into account when designing it. These objectives are also pursued by the Swiss Landscape Concept, which was adopted by the Federal Council in 2020. Among other things, it calls for interventions to be carefully integrated into the landscape in a quality-oriented manner and to allow for natural dynamics.