Waste along Swiss rivers and lakes

28.04.2022 – A recently conducted national study to assess waste along Swiss rivers and lakes found that the origin of waste is quite diversified: in some cases, waste is discarded directly at the given location; in other cases, the waste washes up on river banks or lake shores or is swept up by the wind or other weather conditions. More often than not, the waste is made of plastic. This study will serve as an important frame of reference for action plans to maintain and further enhance the environmental cleanliness of Swiss river and lake regions in the future.

Swiss rivers and lakes are among the most beautiful in Europe and Switzerland is among the cleanest countries in the world. And yet anyone who looks down from the panorama to the ground on the shore of a lake will find an average of around 200 waste items, including 20 cigarette butts, over the space of a hundred metres. This is the conclusion drawn in a recent study of waste along Swiss rivers and lakes. . And even if many European beaches contain twice as much waste, every carelessly discarded plastic bag, every piece of Styrofoam carried by the wind and every piece of industrial foil that is not properly disposed of is already one too many.

These waste items harm plants and wildlife and annoy people who go there for recreation. Over time, the Federal Office for the Environment (FOEN) intends to find the best means of reducing such waste. With this aim in mind, it commissioned a comprehensive study of the situation at river and lake sites. The results of this study are now available in the form of an online report and corresponding data sets, which can be foundhere.

What is the study about?

Dozens of volunteers combed 143 river and lake sites in different parts of the country between March 2020 and May 2021. They collected all visible waste items and classified them according to a detailed code system. They examined riverbank sections in four areas of focus along the Aare, Rhone, Ticino and Limmat Rivers, as well as selected tributaries and lakes linked to these areas.

In addition, waste was collected at monthly intervals at twenty sites along the shores of seven major lakes: Lake Zurich, Lake Geneva, Lake Biel, Lake Neuchâtel, Lake Maggiore, Lake Thun and Lake Walen. To provide a term of comparison, waste was also collected along hiking trails and ski lifts at twenty different locations in the Alp and Jura mountain ranges in the summer of 2021. 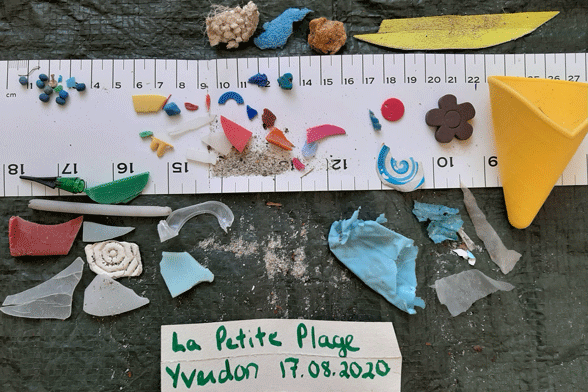 Here we can see plastic objects of various sizes being identified and recorded in Yverdon.

This comprehensive approach enabled the study to provide both a bird's eye view of the overall situation in Switzerland as well as a more detailed analysis of individual riparian zones. The results clearly show that 86% of the waste items found were made of plastic. This is a cause for concern – not least because such waste items decompose into microplastics, which create all sorts of problems. Determining where waste comes from (waste sources) is important: littering (i.e. waste carelessly discarded by people) is certainly an issue, but there are also many other waste sources.

This report is currently available in English (German version will follow), including foreword and executive summary in French and Italian.

What type of waste can be found along Swiss rivers and lakes?

A total of 54,744 waste items were collected and documented along Swiss rivers and lakes alone. Among the most frequently found objects, there is one that stands ahead of all others: cigarette butts. 8,485 cigarette filters ended up in the researchers' bags. Fragmented plastics (7,400 items) and pieces of Styrofoam (5,563 items) come in second and third. After that, the list continues with plastic packaging for sweets and snacks (3,325 items) such as candy bar wrappers. Fifth and sixth place are taken by plastic industrial sheeting (2,534 items) and broken pieces of glass from beverage bottles (2,136 items).

This means that two main waste sources stand out: over one-fourth of the most common items have to do with food, beverages and tobacco. These end up along the banks and shores of Swiss water bodies as a result of littering. Just under one-fourth result from agricultural and infrastructure-related activities. The latter include waste generated from the construction and maintenance of buildings and roads as well as the supply of water and electricity.

The researchers did not limit themselves to documenting the precise location of each waste item. They also drew correlations in terms of how the land was used. They found, for example, that littering was more likely to occur in built-up areas where people had simply left cigarette butts and other waste on a riverbank or along the shore of a lake. Infrastructure-related material such as plastic construction waste, on the other hand, was found in all riparian areas. Among other possible causes, the waste may have washed ashore or been swept up by the wind and carried to another location.

Littering reduced as a result of Corona

Changes in the situation in and around Swiss water bodies can be shown over the past few years. The results of the present study can be directly compared with the most recent national assessment of waste at Swiss river and lake sites, which was conducted as part of the Swiss Litter Report in 2018. The present study used the same methodology as the one used between April 2017 and March 2018. As a result, it is also possible to make statements about the effects of the Corona pandemic, as the surveys for the current study were carried out during precisely this same period.

Some people will find the results surprising: while construction waste, for example, has increased, littering of cigarette butts and bottle caps has decreased. The researchers can only speculate on the reasons: during this period, for instance, there was practically no international tourism, events such as outdoor festivals were cancelled and people tended to gather in smaller groups.

After collection, the waste items were sorted and counted. The corresponding data were then entered into the plagespropres.ch application.

The shores of Lake Walen were also included in the painstaking search for waste.

This study is intended to inform policymakers at federal, cantonal and communal level, enabling them to take a holistic approach to preventing waste along Swiss rivers and lakes. Visitors of riparian zones are just one of many originators of waste. Thus, while anti-littering measures certainly have an impact, they do not suffice on their own. The authors of the study report assert even if all bottles, cigarettes, etc. were properly disposed of in waste bins, other types of waste accounting for 64% of the total would still remain.

This would include cotton swabs that were mistakenly flushed down the toilet or construction foil that was blown away by the wind. A clear understanding of the precise nature of the waste lying along Swiss rivers and lakes enables new measures to be developed. For this, very different interest groups need to be brought on board.

Five facts about the methodology used

This report is currently available in English (German version will follow), including foreword and executive summaries in French and Italian.