When food is produced but not consumed, this leads to unnecessary CO2-emissions, biodiversity loss and land and water consumption. 25 per cent of the environmental impact of our food system is due to food waste (i.e. avoidable food losses). This corresponds to about half the environmental impact of motorised private transport in Switzerland. With the action plan to reduce food waste, the Federal Council wants to halve avoidable food losses by 2030 compared to 2017. This is in line with Sustainable Development Goal 12.3 of the 2030 Agenda for Sustainable Development.

Food losses and food waste refer to all food intended for human consumption that is not consumed by humans.

Food waste is the term used to describe avoidable food loss. These are the edible portions of food that are produced for human consumption, but end up not being consumed by humans.

Unavoidable food losses are, for example, parts of food that are not edible or are considered inedible in our culture.

Swiss food losses from the field to the plate

Around one third of all edible food is lost or wasted between the field and the plate. According to a study by ETH Zurich by Beretta and Hellweg (2019) on food waste, this amounts to around 2.8 million tonnes of wasted food per year in Switzerland and abroad as a result of Switzerland's food consumption (consumer perspective). This corresponds to about 330 kg of avoidable food loss per person per year. Of the 2.8 million tonnes, around 360,000 tonnes of food loss occur abroad, in the production of food that is imported into Switzerland. Losses abroad are not included in the food disposal statistics because they do not have to be disposed of in Switzerland. In addition, around 240,000 tonnes of avoidable food losses occur in Switzerland in the production of food for export. These losses are taken into account in the food disposal statistics, but not in the food consumption statistics (see table below).

The food system amounts to around 28% of Switzerland's total foodprint. A quarter of this is the result of avoidable food losses. The implementation of the halving target in Switzerland would reduce the environmental impact and greenhouse gas emissions of food by 10-15%.

Which types of food waste have the biggest environmental impact?

The environmental impact of a food product also increases with each stage of processing and/or transport, as these processes involve resource consumption and produce emissions. In addition, losses in the processing industry and to some extent in agricultural production tend to be recycled to a higher value (especially as animal feed) than at the other stages of the food chain. Environmental credits are granted for the substituted products (mainly animal feed). 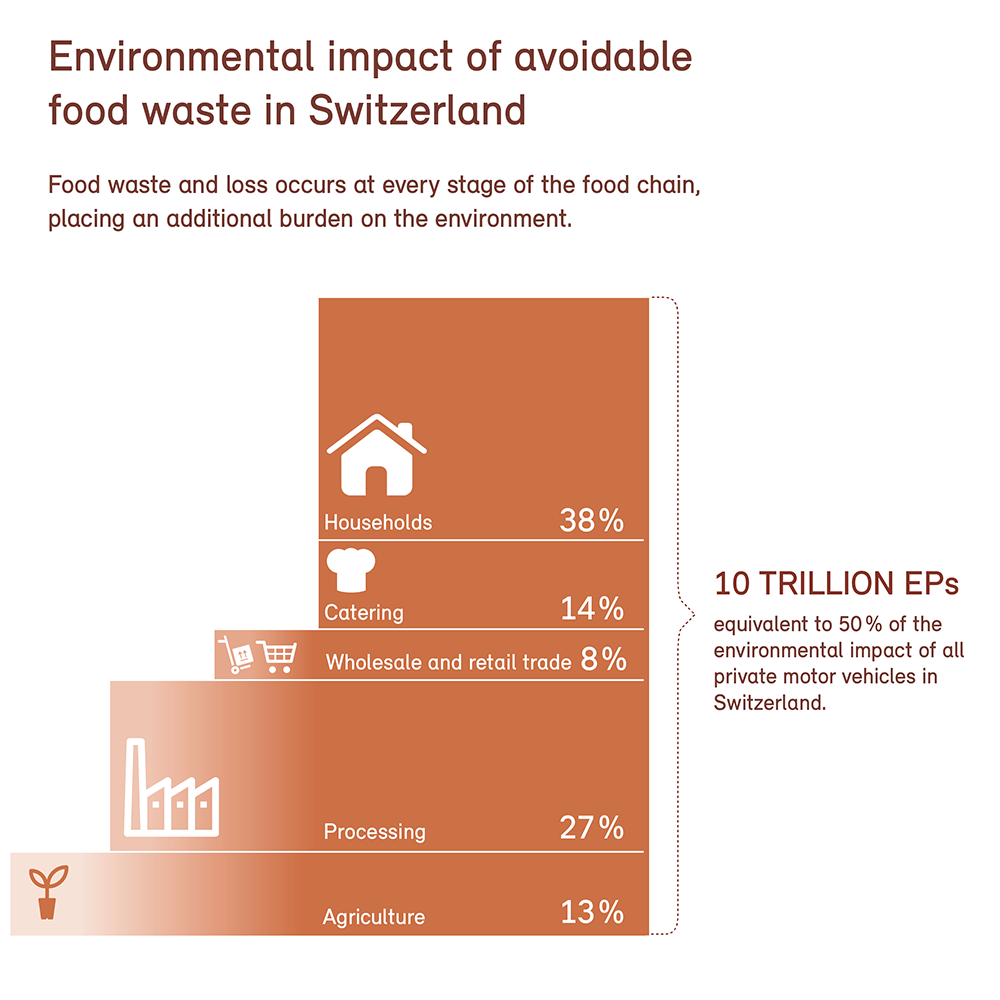 Figure 2 shows the environmental impact of food loss along the Swiss food value chain in trillions of eco-points (EPs). This includes losses in foreign supply chains of food consumed in Switzerland (consumption perspective). The percentages indicate the contribution of each stage in the food chain.

Food losses in Switzerland: Environmental impact and mitigation potential (PDF, 5 MB, 25.10.2019)(document available in German with english abstract) on behalf of the FOEN

2.    Defining industry-specific reduction targets together with the industries

3.    Reducing the environmental impact of avoidable food losses as much as possible through the appropriate formulation and prioritisation of measures

The action plan is divided into two phases. The first phase (2022-2025) comprises seven self-regulatory measures for the economy, five measures for the public sector and two measures on information and education. In 2025, the Confederation will publish up-to-date data on food losses at all levels of the supply and value chain, i.e. agriculture, processing industry, trade, food service and households, and analyse whether the measures of the action plan are sufficient.

The cross-industry agreement on reducing food losses is an important element of the action plan. The agreement creates a framework that enables a coordinated approach to the economy's implementation of self-regulatory measures, raising awareness of positive examples, and striving for and communicating cross-industry progress. By signing the agreement, the parties commit to halving avoidable food losses by 2030. The companies and associations from trade, the food service industry, food processing and agriculture will set measurable reduction targets and take appropriate measures for each stage of the value chain. All parties to the agreement will report annually on avoidable food losses and the measures they are taking to reduce them. The FOEN will regularly provide information on the participants' joint reductions.

The agreement was signed on 12 May 2022 by Federal Councillor and DETEC head Simonetta Sommaruga and 28 members of management from companies and associations in the Swiss food industry.

Other companies and associations in the food industry can sign the cross-sectoral agreement at any time. Would you like to help cut avoidable food losses? Then get in touch with us (see contact box at the top right).

Federal Office for the Environment FOEN
Economics and Innovation Division

Location of our offices:
Monbijoustrasse 40, 3003 Bern