Given that one fifth of the world’s population lacks access to safe drinking water, the protection of drinking-water resources is a priority issue at global level. In view of its experience in the area of freshwater management, Switzerland is keen to contribute to the international efforts for the preservation of this essential resource.

Switzerland a rich source of water within Europe 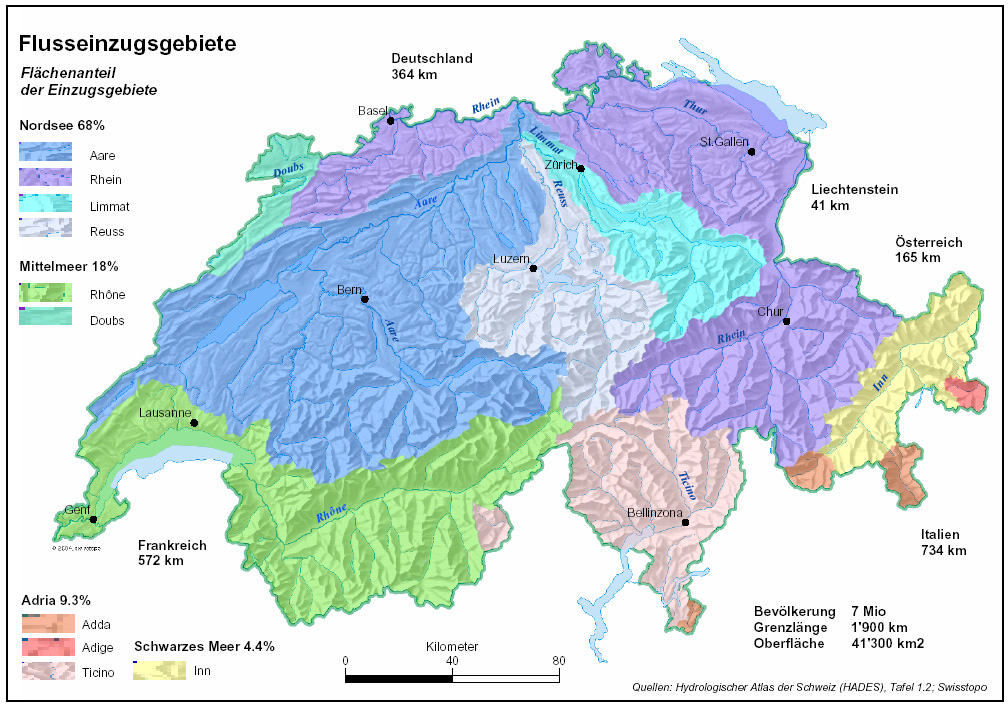 Switzerland is well known as a rich source of water: 6% of Europe's freshwater reserves are to be found in this country, although it only accounts for 0.4% of the total area of the continent. Some of Europe's largest rivers, the Rhine and the Rhône, rise in the Saint Gotthard massif. Switzerland's water supply in the form of mean annual precipitation (1456 mm) is almost twice the European average (770 mm).

The largest proportion of the country (67%) is drained via the Rhine into the North Sea. As a result, the catchment areas of the waters flowing into the Mediterranean (Rhône, 18%), the Adriatic (Po, 9.3%) and the Black Sea (Danube, 4.4%) are correspondingly smaller.

Water knows no boundaries. Not counting lakes, there are 286 transboundary watercourses, as well as hundreds of transboundary aquifers.

The 1992 Convention on the Protection and Use of Transboundary Watercourses and International Lakes, which was developed for the United Nations Economic Commission for Europe (UNECE) region, went global in 2016 based on a proposal by Switzerland. Its objective is to promote international cooperation in order to protect water quality and guarantee the sustainable use of transboundary surface and underground waters. The Convention sets out the requirement of adopting integrated water resources management. A secretariat in Geneva supports these efforts, which involve numerous working groups focused on various aspects, such as water and climate change, the benefits of transboundary cooperation, relationships with agriculture and energy, etc.

UNECE: Water Convention on the Protection and Use of Transboundary Watercourses and International Lakes

The Convention on Wetlands is an intergovernmental treaty that provides the framework for national action and international cooperation for the conservation and wise use of wetlands and their resources. This instrument also addresses the management of biological diversity and water.

World Water Week takes place every year in Stockholm, Sweden and attracts governments, academics and NGOs. During the week, specific innovative themes are explored in depth and the prestigious Stockholm Water Prize, the “Nobel” prize for water, and the Industry Water Award are presented.

As well as being home to more than 6% of Europe's freshwater reserves, the sources of some of the continent's major rivers, such as the Rhine and the Rhone are located in Switzerland. Switzerland fulfils its water protection responsibilities vis-à-vis its European neighbours and is an active member of various international water protection commissions.

International Commission for the Protection of the Rhine (ICPR)

The Convention on the Protection of the Rhine instituted the International Commission for the Protection of the Rhine, whose members are France, Germany, Luxemburg, the Netherlands, Switzerland and the European Commission. The members work with Austria, Liechtenstein, the Belgian region of Wallonia and Italy to conserve and restore the Rhine ecosystem. Their activities focus on the sustainable development of the Rhine and its floodbanks and the restoration of all water in the basin. One of the objectives of the Rhine 2040 Programme, which was adopted in 2020, is to complete fish passability. In other words, migratory fish shall again be able to migrate from the North Sea up to the Rhine Falls at Schaffhausen and colonise their habitats.

International Commission for the Protection of Lake Geneva (CIPEL)

To permit continuous monitoring of water quality in the Rhine, Switzerland, together with the German state of Baden-Württemberg, has also established an international monitoring station at Weil am Rhein. The station, maintained by the Basel-Stadt Environment and Energy Office, is part of the ICPR's warning and alarm system for the Rhine.

Nitrogen inputs from wastewater treatment plants are one of the main contributors to the alarming levels of marine pollution. Switzerland is committed to reducing inputs of nitrogen into the Rhine and North Sea.