Streams, rivers, lakes and groundwater are under pressure. Many waterbodies and watercourses are polluted by fertiliser residues, pesticides and pharmaceuticals. They are channelled, straightened and otherwise regulated. They are also affected by the generation of hydropower. Moreover, introduced plants and animals as well as climate change are having an ever greater negative impact.

Since the mid 19th century, watercourses have lost much of their natural diversity. They have been channelled and otherwise regulated, and their natural banks replaced by hard embankments; as a result, the structure – or ecomorphological condition – of almost a quarter of all watercourses is poor. 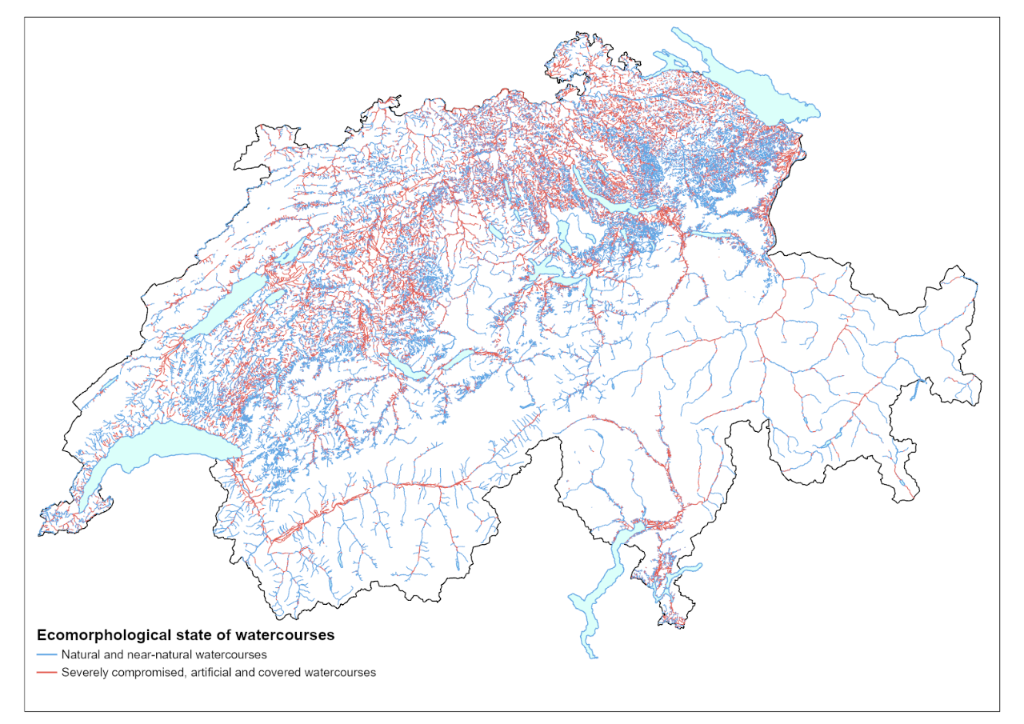 The water level of 30 of Switzerland's 35 largest lakes is artificially regulated. More than 50 per cent of the shores of its large lakes are embanked. As a result, ecologically important transition areas between aquatic and terrestrial habitats have disappeared

At around 1,400 locations in Switzerland, water is extracted from rivers for electricity production in hydroelectric power plants. This means that often only a fraction of the natural discharge remains in the rivers. Around 2,700 km of Swiss rivers are affected. Where there is too little water, aquatic animal and plant habitats are lost.

Around 1,000 dams, weirs, rapids and ramps are obstacles for fish and other creatures.

Around 500 hydroelectric plants and other installations prevent more than 2,000 kilmetres of river from transporting material (bed load), which is also of ecological importance.

Around 100 storage power plants often cause artificial discharge fluctuations (hydropeaking), which can strand aquatic organisms on gravel banks that dry out in a very short time or are washed away by sudden flash floods. This affects about 1,000 kilometres of river.

Large volumes of substances are used each day in agriculture, industry, commerce and households. Some of these substances pollute waterbodies and contribute to the loss of biodiversity. Nutrients from agriculture and sewage treatment plants enter watercourses and groundwater, leading to contamination and overfertilisation of lakes. Pesticide and medicine residues from these sources also enter the water. Even at very low concentrations they can have adverse effects on aquatic life and contaminate groundwater, and so are known as micropollutants.

Nutrients and pesticides from agriculture primarily enter waterbodies on the Swiss Plateau and on the valley floors. Here there are large areas of arable land, vineyards and orchards in which significant amounts of pesticides and fertilisers are applied.

Not all substances are completely retained in municipal wastewater treatment plants, of which there are over 700 in Switzerland. In other words, micropollutants, nutrients and small plastic particles can enter waterbodies in treated wastewater. 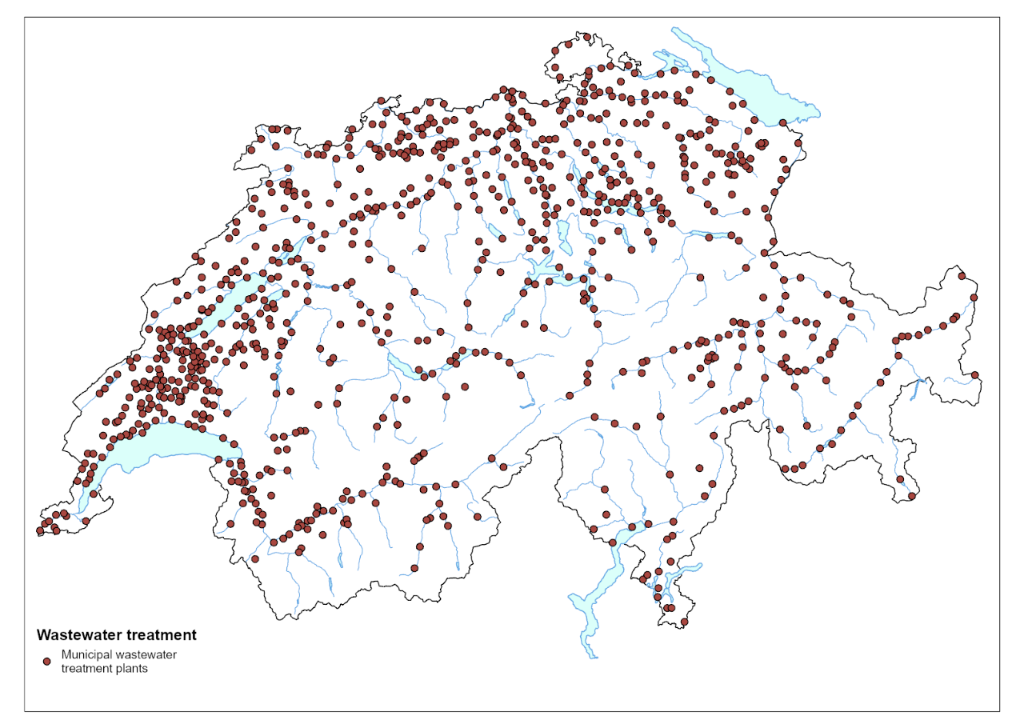 Micropollutants, nutrients, plastic particles and other substances from households and traffic also enter waterbodies via diffuse pathways that are difficult to localise.

Built-up areas and transport are encroaching on areas that are required for sustainable drinking water production from groundwater. Sealed ground prevents groundwater from being replenished. Areas with an insufficient filtering effect also increase the risk of water contamination. Today, there are very few remaining undeveloped, extensively used areas on which the required protection zones around drinking water catchments can be established.

Climate change is affecting lakes and rivers in different ways. Water temperatures are rising and there are more frequent and longer dry periods and extreme flood events. Higher lake water temperatures also affect the exchange between the water at the surface and that in the depths of the lakes and therefore the oxygen supply in deep water. In the coming decades, these climate impacts will become even more pronounced.

An increasing number of alien plant and animal species are found in Swiss waterbodies and watercourses. They are particularly common in large rivers and in some lakes, where they can severely alter entire habitats and are thus a factor in the decline in biodiversity.